Discussions will also start on piloting a sea VTL to allow Singapore cruise ships to call at Malaysian ports, said Mr Lee after meeting his counterpart Ismail Sabri Yaakob, who is here on an official visit.

Speaking at a joint press conference with Datuk Seri Ismail on Monday, Mr Lee said the leaders agreed to work towards aligning safe cruise standards and start discussions on a possible VTL for travel between Tanah Merah Ferry Terminal and Desaru in Johor.

But these moves would have to take into account the public health situation.

“We are all watching anxiously the new Omicron variant to see how it will behave,” Mr Lee said at the Istana.

“But even if Omicron disrupts these plans, our goal will still be to have more open borders between Singapore and Malaysia, and I’m quite confident that after some time, we will be able to make further progress.”

Mr Ismail is in Singapore for his first official visit as prime minister. He and Mr Lee had earlier witnessed the launch of the land VTL at Woodlands Checkpoint.

Calling the scheme “another significant milestone” in both countries’ cooperation, Mr Ismail said he had discussed with Mr Lee the additional measures that will be taken in the cross-border travel between Malaysia and Singapore.

“Both of us have agreed to, one, include all categories of travellers for the VTL land, subject to the health requirements determined by both countries.

“Two, to expand VTL land to include additional bus services routes through the Second Link, trains operated by KTM, and gradually to include personal vehicles such as motorbikes and cars,” said Mr Ismail.

Mr Lee said the VTL is starting with “modest numbers”.

“It will take us some time before we get anywhere near to pre-Covid levels. But we will progress step by step, and get it working first,” he added.

Other areas of cooperation discussed by the two leaders include the Johor Baru-Singapore Rapid Transit System Link project.

Mr Lee said construction was ongoing and that he looked forward to passenger service commencing by end-2026.

He also said that both leaders discussed the issue of the Kuala Lumpur-Singapore High Speed Rail (HSR), with Mr Ismail suggesting reviving discussions on the project, which had been terminated.

Said Mr Lee: “I responded to the Prime Minister that Singapore and Malaysia had previously reached agreement to terminate the HSR project, and this had been amicably settled and closed.

“Nevertheless, Singapore is open to fresh proposals from Malaysia on the High Speed Rail project, and the two ministries of transport will discuss the matter.

“Singapore looks forward to receiving more details from Malaysia, so that we can study them and consider the matter again starting from a clean slate.”

Mr Lee also said he was glad to have met Mr Ismail in person to reaffirm the strong bilateral ties between Singapore and Malaysia, and looked forward to hosting him for a Leaders’ Retreat, hopefully early next year.

“I look forward to building equally strong relations with PM Ismail Sabri, and continuing to strengthen our bilateral ties and cooperation.”

The two countries are close neighbours with a shared history, Mr Lee said. “Our economies are extensively intertwined. Our peoples share strong bonds of kinship, friendship and memories. So the closing of borders was very tough on both sides.”

During the pandemic, Singapore and Malaysia continued to work closely with each another, he said. Even as borders were closed, both sides worked hard to maintain essential business and official travel.

Schemes such as the Reciprocal Green Lane and the Periodic Commuting Arrangement for workers, as well as arrangements for urgent compassionate travel, were implemented, he noted.

Mr Ismail was instrumental in making these happen, when he previously co-chaired the Singapore-Malaysia Special Working Committee on Covid-19, said Mr Lee.

Mr Ismail received a welcome ceremony on Monday at the Istana, where he called on President Halimah Yacob. His visit is the first by a Malaysian PM since Tun Dr Mahathir Mohamad made a similar visit in November 2018. 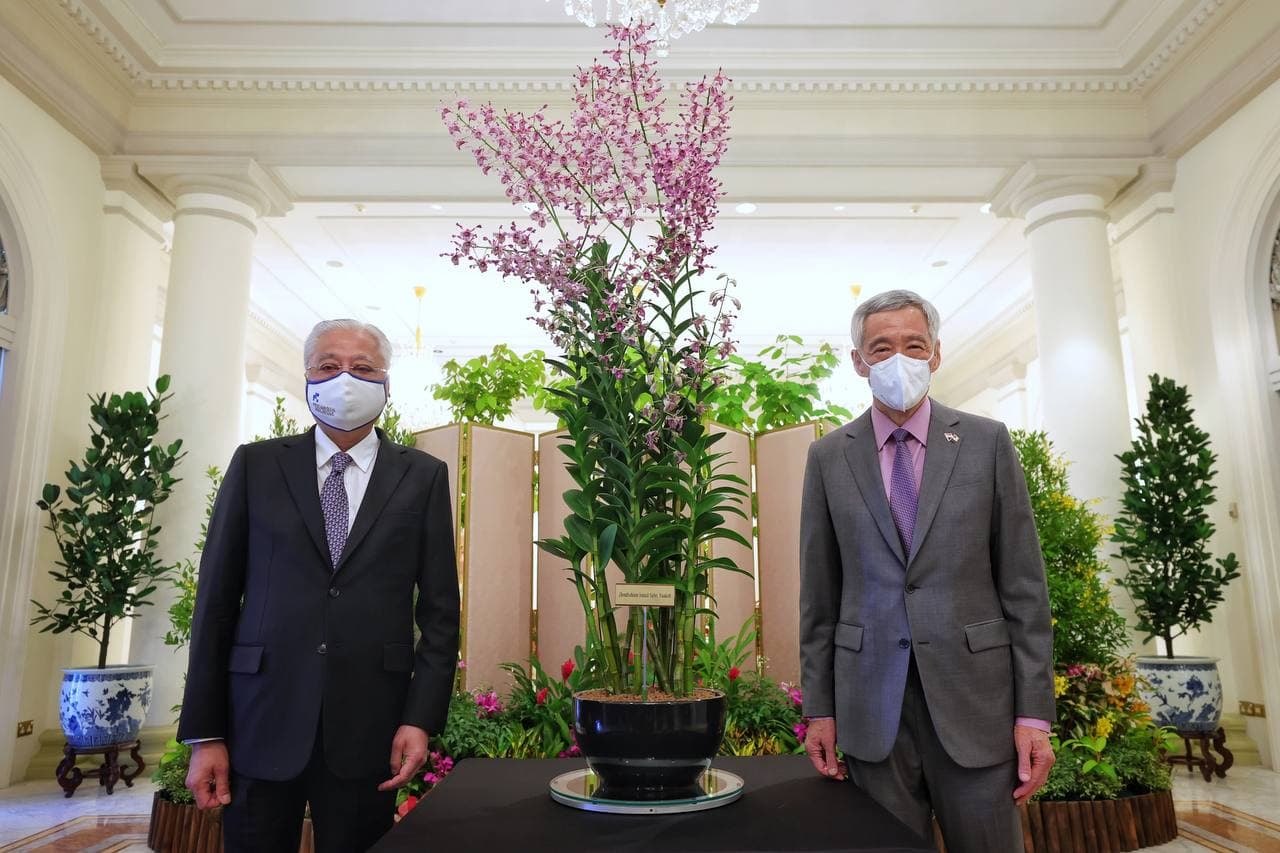 At the Istana, Mr Ismail was also presented with a spray of pink-purple orchids named in his honour.

The Dendrobium Ismail Sabri Yaakob, as it was named, is a “robust and free-flowering” orchid hybrid that produces upright inflorescences that measure up to 50cm in length with 25 to 35 flowers, said a statement from the National Parks Board.

At the press conference, Mr Ismail said cross-border movement by air, between Singapore and destinations like Penang, Langkawi, Kuching and Kota Kinabalu, was also discussed with Mr Lee.

“Both of us decided that our officials should start to draw up measures for this purpose,” he said.

Another topic of discussion was the situation in Myanmar, said Mr Ismail.

“We agreed that it is crucial for Asean to continue playing a positive and constructive role in facilitating a durable and peaceful solution in the interests of Myanmar and in the larger interest of the Asean community.

“We share the same view that it is crucial for Myanmar to cooperate in the implementation of the Five-Point Consensus, and the necessity to preserve the credibility and integrity of Asean.”