Considering the recent string of wild boar attacks in Singapore that left several people injured and traumatised, netizens were floored when a man seemed to charm the animal with a couple of words.

In a video shared on Facebook page Singapore Wildlife Sightings on Thursday (Feb 25), a man captured the moment where a curious wild boar lumbered up to him and tentatively sniffed his shoe.

“Go to sleep David,” he told the animal, patting it on the back a couple of times as he spoke. Much to the surprise of netizens, the animal actually turned on the spot before plopping itself onto the ground and exposing its belly.

It didn’t seem to mind the man patting its stomach either.

Some netizens were amazed by how tame and docile the wild boar was. Some even called him a ‘boar whisperer’, in reference to a famous dog behaviour expert who calls himself ‘The Dog Whisperer’. 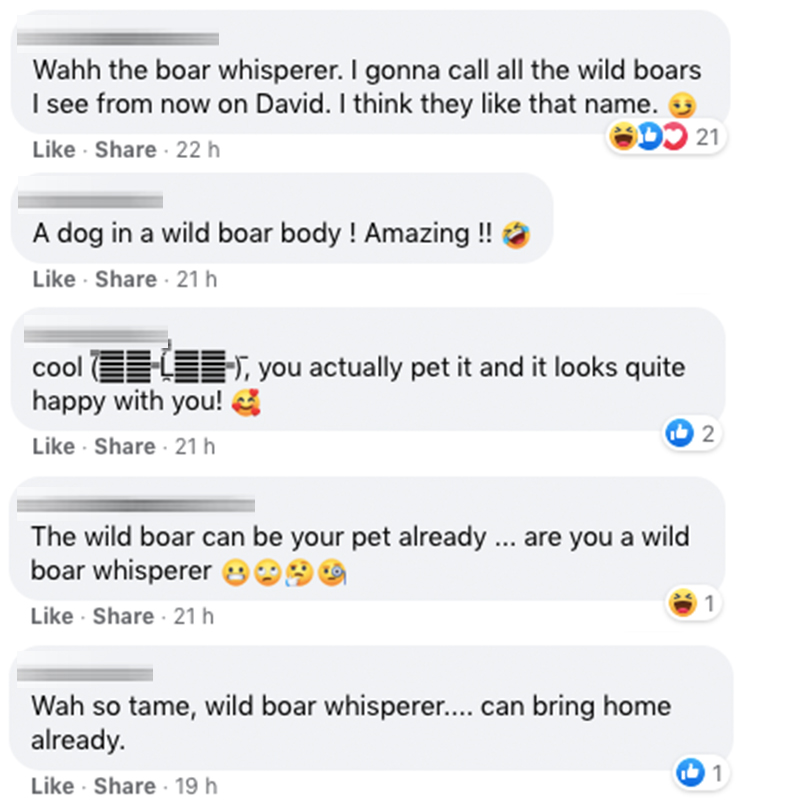 However, in light of recent events, many others pointed out how his actions were extremely risky and could put others at risk, should they be misled by his video.

“Not all are friendly,” one cautioned while another said imitating the video could result in “more Punggol accidents”. 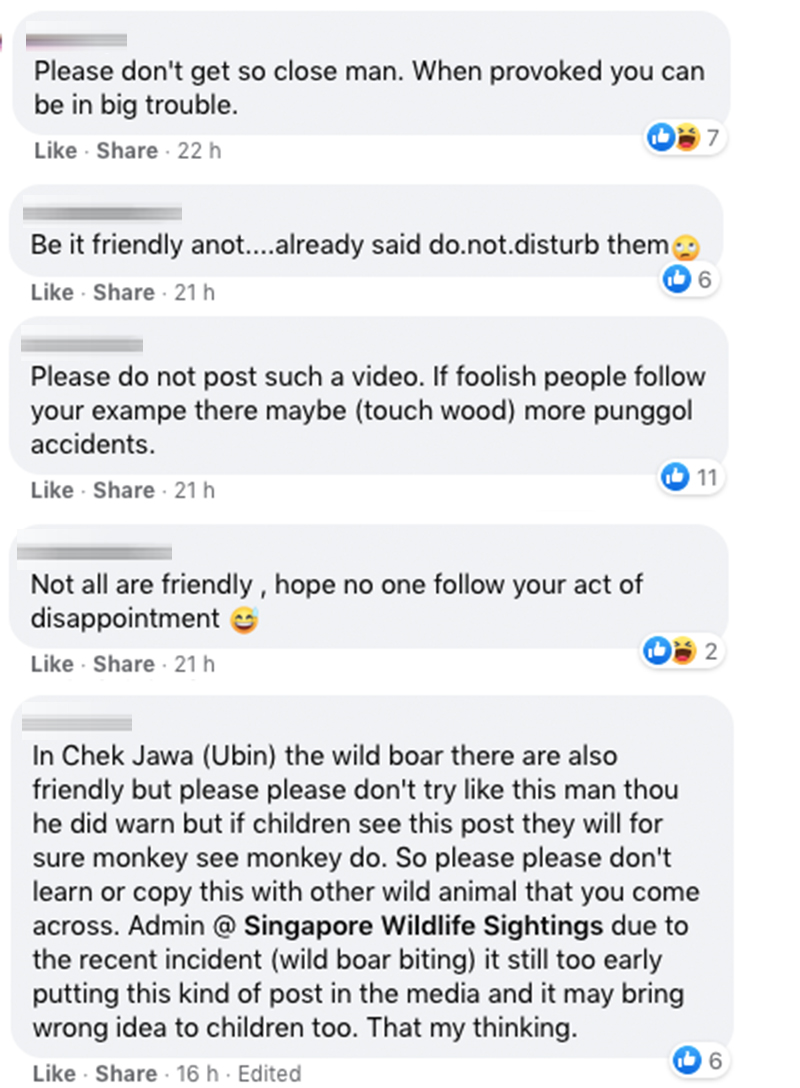 In his post, the man explained that he had grown up in a village in Thailand, and hence had experience handling wild animals. For those without sufficient knowledge and experience, he advised staying far away from the wildlife.

Although the video showed the gentle nature of a wild boar, it was “very sad to watch such videos” as the boar “appears to have been conditioned by someone who feeds the animal,” Anbu, the co-CEO of Animal Concerns Research and Education Society (Acres) told AsiaOne on Friday.

“Feeding wildlife is not only against the law, but makes the wild animals approach people with trust and wander into residential areas where they wouldn’t have come normally.”

When animals enter residential areas, they may be triggered by sudden loud noises or bright flashes of light, which could result in accidents, she explained.

Acres urged members of the public to refrain from approaching wild animals, even if they appear calm, and to appreciate them from a distance instead.

“Approaching or feeding them is good for neither the animals nor the people.”

Just this week, a wild boar attacked and dragged a woman in Punggol, leaving her leg in a bloody mess.

A group of wild boars also charged towards a few contractors at Singapore Island Country Club and injured them earlier this month.

There has been a number of wild boar incidents in recent years. Last November, a woman suffered a 10cm long gash on her leg, another had her curry puffs stolen straight out of her bicycle basket. In 2019, a wild boar charged across the busy Upper Bukit Timah Road and rammed into an SUV.

According to an advisory by the National Parks Board (NParks), wild boars attack when they are cornered or feel threatened. Female boars, in particular, are very protective of their young and are easily provoked.

As wild boars are strong animals — and adult males have canines capable of inflicting serious injuries — NParks advises members of the public to keep a safe distance, keep calm and move away.