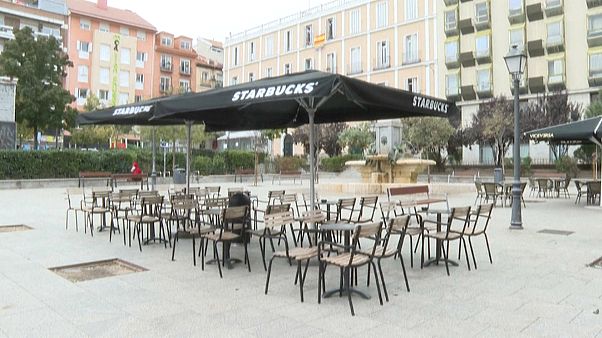 After serving drinks for two decades, Miguel Garcia’s pub ‘Scalas’ is now almost empty because of the COVID-19 pandemic.

But in a bid to keep struggling bars like his alive, the Madrid government has created new legislation allowing pubs without a food license to serve meals.

To this end, Garcia is one of many kitting out his bar with appliances such as microwaves, cold storage units and hot dog machines.

But he says it’s just a temporary solution and not many people just want snacks, so life is still hard for these pub owners.

There are around 1600 nightlife venues in the city of Madrid, which all now have to close by 11 pm due to the national state of emergency restrictions.

Antonio Extremera, the owner of ‘Marta CARIÑO!’ who already has a license to serve food, has only had to adapt to newly enforced closing times.

He decided to extend his daytime opening hours at lunchtime in the hope of making more money. But many are still wondering how many people will come through their doors.

He emphasises how important it is for restaurant owners to have an idea how many people they will be feeding so they have enough stock and food doesn’t spoil.

The Federation of Nightlife and Entertainment Entrepreneurs represents and protects the interests of Spain’s discos and clubs at a national level. It hopes the new legislation will curb the loss of jobs and keep the night sector open.

But unlike other EU countries, where the cash given to help businesses survive the pandemic is not expected to be repaid, Spanish businesses must repay the aid.

Vicente Pizcueta, the spokesperson of the federation of nightlife and entertainment entrepreneurs says “the refund of the credits, that injected funds into nightlife businesses at the beginning of the crisis in March must be suspended for three years.”.

The Federation estimates that the sector will lose around 1.6 billion euros this year.

The new law is expected to help prevent nightlife from disappearing entirely in Madrid. According to España de Noche, the body that oversees the night industry, more than 80% of the pubs and discos of the capital could disappear before Christmas due to the restrictions.