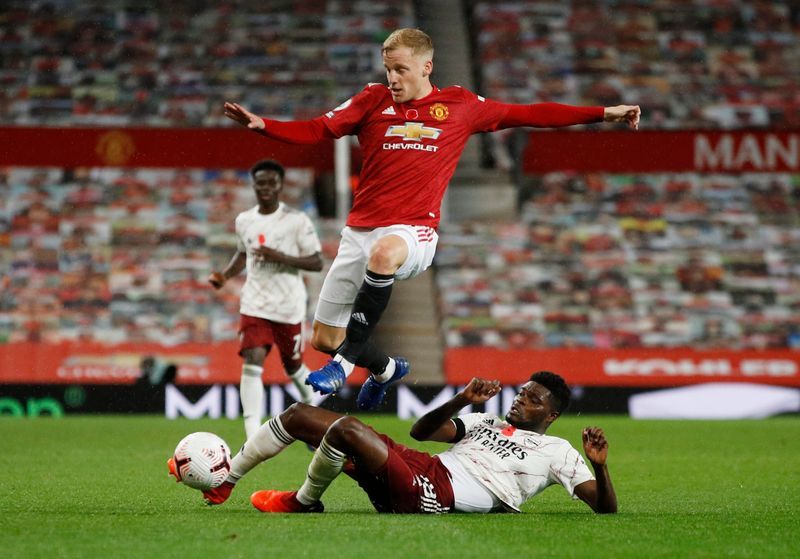 (Reuters) – Handed a rare start in Manchester United’s 4-1 Champions League win over Istanbul Basaksehir on Tuesday, Dutch midfielder Donny van de Beek was pleased with his performance after impressing in a deeper role in the absence of Paul Pogba.

Van de Beek, signed from Ajax Amsterdam for a reported 35 million pounds ($46 million) in September, was deployed at the base of the United midfield behind Bruno Fernandes instead of further forward in the number 10 slot.

Despite the positional switch the 23-year-old looked comfortable throughout the 90 minutes as United secured victory to keep them on track to progress to the knockout stage.

“It was really good. Some games I play number 10, sometimes the coach needs me in the control position, that’s fine for me. Sometimes in Ajax I was also playing in that position so it’s OK,” Van de Beek told MUTV.

“I think it’s a good reaction from the away game, 4-1 at home, you can be happy. First half was really good, especially the first 30 minutes, we played really nice football, scored really nice goals.

“Second half we lose too many balls, we gave them some chances, but last five minutes we control the game again and we make a nice (fourth) goal.”

French midfielder Pogba was not in the squad and manager Ole Gunnar Solskjaer confirmed he was sidelined due to injury.

“His ankle has swollen up,” Solskjaer said. “We trained yesterday but he didn’t feel right. This morning it was just confirmation that he couldn’t play.”

(Reporting by Rohith Nair in Bengaluru; Editing by Peter Rutherford)