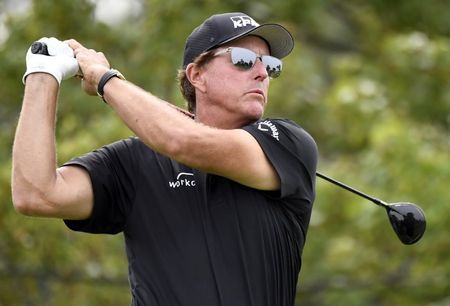 MAMARONECK, N.Y. (Reuters) – Phil Mickelson’s dreams of completing the career Grand Slam by finally winning the U.S. Open and getting revenge on a course that has tormented him were all but lost in Winged Foot’s long rough on Thursday after he carded an opening round 79.

Mickelson hit just two fairways, the same number he hit at the course in the final round of the 2006 U.S. Open, when he suffered one of the most dramatic collapses in golf history on the tournament’s final hole.

“I don’t know what to say. It’s a disappointing day,” Mickelson told reporters.

“I drove it poorly and I putted poorly,” he said.

“The course couldn’t be set up any better. It’s a spectacular golf course, great design, awesome setup, and I thought it was a good opportunity to score low today. I just played terrible.”

It would have been a fairytale ending if the popular 50-year-old American, a runner-up at the U.S. Open a record six times, managed to overcome the odds to win the tournament, but his round left him tied for second-to-last place in the 144-player field.

He found the rough on his first two holes but managed to fight back to make birdie on both to sit two-under through two holes.

But his errant tee shots would continue and he had nine bogeys and a double bogey the rest of the way to card a nine-over 79 – a score that tied for his worst opening round ever at a major.

Mickelson famously started the 18th hole at Winged Foot in 2006 with a one stroke lead but chose to use a driver off the tee and promptly hit a hospitality tent.

His second shot hit a tree and he finished with a double-bogey six to end the tournament one shot behind winner Geoff Ogilvy.

Mickelson sounded resigned to having to wait another year for a shot at U.S. Open redemption.

“I’ll play as hard as I can tomorrow and enjoy the round.”