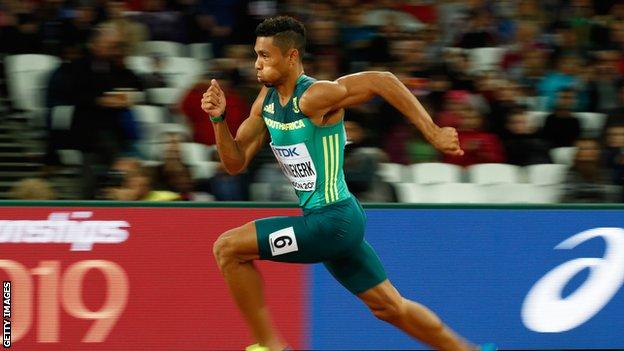 He won at a meeting in Switzerland, his first competitive race outside his homeland since taking gold at the 2017 World Championships in London.

Van Niekerk clocked 45.58 seconds on Tuesday, a modest time compared with his world record of 43.03.

“Back at it! Forgot how to race for a moment,” he posted on social media.

“But it’s lovely being back on track. Appreciate all the love #quietstorm.”

His career has been blighted by injuries since October 2017 when he ruptured the anterior cruciate ligament in his right knee while playing in a charity touch rugby match in Cape Town.

After recovering from surgery, he had hoped to defend his world title in Doha last year but another knee injury meant he put his return on hold rather than risk further problems.

In February van Niekerk won a university-level 100m on a grass track in Bloemfontein.

His planned international comeback in August in Italy was disrupted when he returned what proved to be a false-positive test for coronavirus.

In July, he told BBC Sport he wanted an “untouchable” 400m legacy and become the first man to break the 43-second barrier.