Democratic Progressive Party (DPP) Legislator Fan Yun (范雲) and political reform advocates yesterday called for a reduction of the deposit required from people who want to run for public office, saying the current rules have turned the nation’s elections into “a game for the rich,” while marginalizing most people from participatory democracy.

“The system should be open for ordinary citizens to run for public office. It should not have thresholds to rule out people based on wealth and assets,” Fan told a news conference in Taipei.

“That was why I refused to put up the NT$2 million [US$70,582 at the current exchange rate] as a deposit when entering the race for the Taipei mayoral election in 2018,” Fan said. 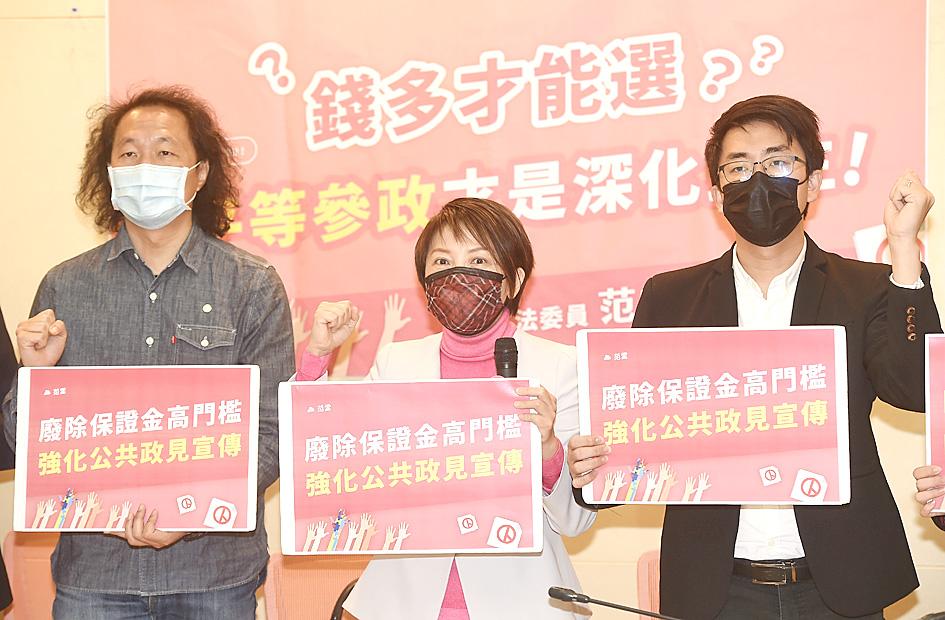 She filed a lawsuit seeking a constitutional interpretation on the deposit requirement after the Central Election Commission disqualified her for failing to deposit the money and did not allow her to register as a candidate.

“The deposit requirement is unconstitutional, as people are denied equal rights to participate in elections and hold public office,” she said, vowing to appeal a Taipei High Administrative Court ruling against her.

The deposit must be reduced to “reasonable levels,” she said.

It is unfair to ask young people or ordinary people to deposit NT$200,000 to register in city and county councilor elections, and NT$50,000 for local borough warden office elections, she added.

Furthermore, a candidate forfeits their deposit if they cannot obtain the votes of at least 10 percent of all eligible voters in an electoral district, Fan said.

“No deposit money is required in France and many US states, where candidates can run for office based on signature drives, or there are very low deposit amounts. Canada, Germany, Ireland and other countries used to require deposits, but they changed their requirements after it was ruled unconstitutional,” she said.

In this way, the political system becomes “big money politics” and “turns elections into a game for the rich, excluding most people from our participatory democracy,” Chang said.

The threshold for political parties to receive government subsidies has been set at 3 percent of the number of votes cast in the latest legislative election, which is too high and should be lowered to 1 percent, Liu said.

“This would better conform with the vision for Taiwan’s multiparty diversity in the political landscape, and promote the development of our democratic society,” Liu added.