A COVID-19 vaccine trial carried out in Taiwan has found that a combination of the AstraZeneca and the locally developed Medigen vaccines is more effective than two doses of AstraZeneca, the research team said on Saturday.

The trial, which was initiated by Chang Gung Memorial Hospital, examined 100 people aged 22 to 62 divided into two groups: One group was vaccinated with two AstraZeneca doses, while the other received a first dose of AstraZeneca and a second dose of Medigen, team leader Chen Chih-jung (陳志榮) said.

The geometric mean titers (GMTs) of neutralizing antibodies in the mix-and-match group after 10 days were 1.8 times higher than in the AstraZeneca group, said Chen, who heads the Molecular Infectious Diseases Research Center at the hospital’s Linkou branch. 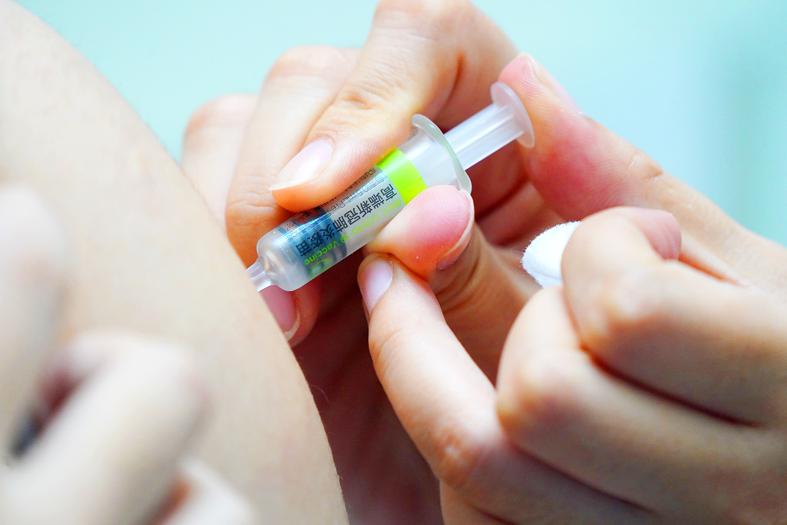 After 28 days, the level of neutralizing antibodies was 1.1 times higher in the mix-and-match group than in the AstraZeneca group, he told a seminar on the trial’s findings at the hospital.

The GMTs were twice as high when the Medigen dose was given four to six weeks after the AstraZeneca dose, rather than an interval of eight to 10 weeks, Chen said.

Another study at the hospital tracked the levels of neutralizing antibodies in 683 hospital employees inoculated with AstraZeneca and Moderna, he said.

In a mix-and-match group, the level of of the neutralizing antibodies was far from ideal when a Moderna dose was given more than 12 weeks after a first dose of AstraZeneca, Chen said.

People who decide to follow the mix-and-match approach should have an interval of no more than 10 weeks between the first and second doses, he said.

The hospital employees’ second doses were delayed by more than 12 weeks because of supply issues, so they were allowed to mix vaccine brands, Chen said.

The government presently allows people who received a first dose of AstraZeneca to get a Pfizer-BioNTech or Moderna vaccine as their second dose after a minimum interval of eight weeks.