‘THE NEXT STEP’:
The vaccines are being tested to ensure correct temperatures had been maintained during flight and would be used to inoculate people in priority groups

Australia yesterday received 300,000 doses of the AstraZeneca COVID-19 vaccine and is to begin using them by Monday next week.

Australian Prime Minister Scott Morrison announced the arrival in a statement, saying that it was “the next step as we ramp up the vaccine rollout.” 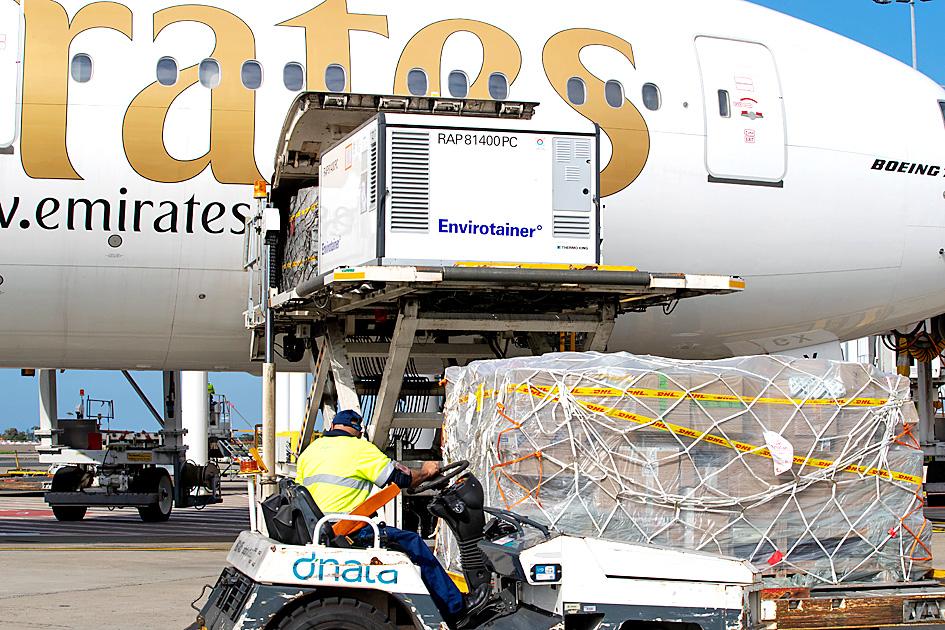 The AstraZeneca vaccine, which has been approved by the Australian Therapeutic Goods Administration (TGA), is the second COVID-19 vaccine to arrive in Australia after Pfizer’s jab began arriving early last month.

The first doses of the new vaccine would be held in a storage facility in western Sydney before undergoing batch testing by the TGA.

Australian Minister of Health Greg Hunt said temperature checking on the vaccines was under way, but that his “preliminary advice” was the correct temperatures to store the vaccine had “been maintained throughout the course of the flight.”

Hunt also said he expected about 50,000 doses of the Pfizer vaccine to be sent to Australian states over the next few days.

“It’s another important milestone,” he said. “In one shipment we have more than doubled the total amount of vaccines that have arrived in Australia.”

Morrison said the arrival meant “we will now be able to scale up the vaccination rollout to our priority groups, including our most vulnerable Australians and to our frontline border and health workers.”

“Australia is in a unique position, because, importantly, this vaccine gives us the ability to manufacture onshore. Every Australian who wishes to be vaccinated will be able to receive a vaccine this year,” Morrison said in the statement.

The first phase of the nationwide vaccination program began last week, with healthcare and border workers the first to be inoculated.

However, Berejiklian told reporters that state leaders are still unsure of how and when the general population would get access to a vaccine.

“I’ve made no secret of the fact … that we would appreciate as much information in a timely way, but we also appreciate that’s not always possible,” Berejiklian said. “Our NSW health officials were able to turn around the Pfizer vaccine supply we’ve got very quickly — within days — because we’ve been planning for it.”

Berejiklian said the states were concerned about the information they were receiving about the timing of supply.

“I’m not going to hide the fact that our information is key for the states to be able to do our work as best we can,” she said. “The more notice we have the better.”

Her comments came as NSW notched up the 42nd day without a single case of COVID-19 transmitted locally.