LIKE-MINDED ALLIES:
The two leaders agreed to cooperate to strengthen the WHO and industrial supply chains, tackle climate change and better compete with China

US President Joe Biden and Canadian Prime Minister Justin Trudeau said their nations would adopt a unified approach toward the COVID-19 pandemic, climate change and China, setting aside trade and other tensions in what the White House called the new US president’s first bilateral meeting.

After about a two-hour virtual meeting between the two leaders and their staffs on Tuesday, Biden said that they had agreed to cooperate to strengthen the WHO and industrial supply chains, “tackle climate change” and “better compete with China.”

He called on Beijing to release two detained Canadian citizens, saying that “human beings are not bargaining chips,” adding that Washington and Ottawa would “strengthen our shared commitment to provide safe haven for refugees and asylum seekers.” 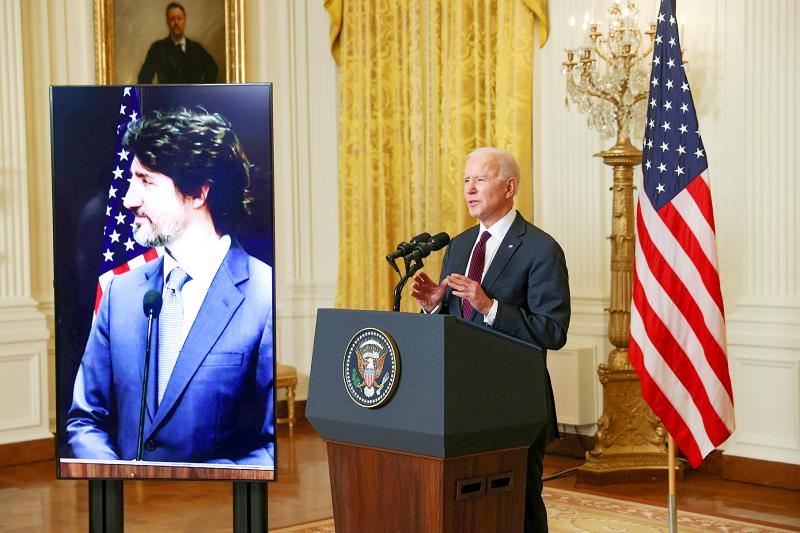 Biden portrayed the relationship with the US’ northern neighbor and largest trading partner as reinvigorated, after strains over immigration, trade and defense under former US president Donald Trump.

The new president made no mention of current disputes between the countries, such as Biden’s decision to halt construction of TC Energy Corp’s Keystone XL oil pipeline linking oil-rich Alberta to Nebraska.

The meeting was intended by the US as a COVID-19-era replacement for the tradition of a new president taking his first foreign trip to Canada. The leaders announced what they called a “road map” to improve cooperation across a range of topics, from climate change to the coronavirus.

“In the face of COVID-19, of climate change, of rising inequality, this is our moment to act,” Trudeau said.

They announced a forthcoming ministerial meeting on climate and the resumption of the Cross-Border Crime Forum, an annual gathering of top law enforcement officials from each country to examine ways to collaborate on counterterrorism, and efforts to combat smuggling and organized crime.

Although Biden and Trudeau are more closely aligned politically than Trump and the Canadian leader, sore spots have emerged with the new administration.

Biden said on his first day in office that the Keystone pipeline is not “consistent with my administration’s economic and climate imperatives.”

Trudeau has called the project — which would have shipped more than 800,000 barrels of crude a day from Alberta’s oil sands to US refineries — a key priority, and raised concern about Biden revoking a permit for the project in a phone call with the president last month.

“Canadian energy workers power homes on both sides of the border,” Trudeau said after the meeting. “It goes to show that we’re all better off for this partnership.”

Moreover, Biden’s “Buy American” order that strengthened requirements for federal spending, clamping down on contractors’ use of foreign suppliers, might spell trouble for Canadian suppliers that sell to US companies that contract with the federal government.

Trudeau is expected to seek waivers similar to those granted during former US president Barack Obama’s administration to help protect Canadian businesses, but White House aides on Tuesday said that they did not anticipate the president offering any guarantees on procurement policy.

The US has sought the extradition of Meng to try her on fraud charges. Her extradition case remains pending in Canadian courts.

“We’re going to work together until we get their safe return,” Biden said.

“China’s judicial sovereignty does not tolerate any interference,” he said.