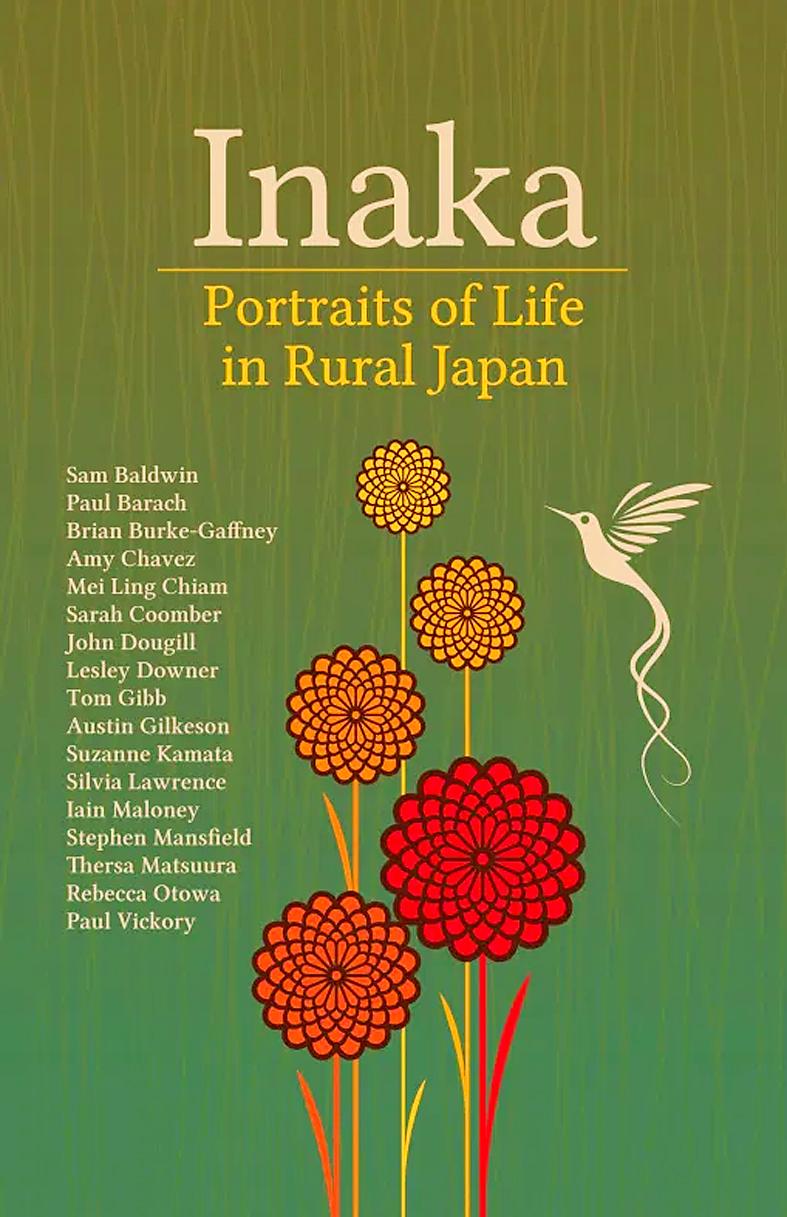 Inaka apparently means “countryside” or maybe “out in the sticks” in Japanese, and this is a collection of 18 essays on the experience of living there.

Rural Japan has had a bad press, not least from longtime Japanese resident Alex Kerr who in Lost Japan describes a country where many of the rivers have concrete beds and are frequently dammed. But it isn’t all like that, and the articles in this book by and large tell a different story.

It’s so attractive, for instance, to this book’s editor, Camphor Press’s John Ross, that he writes that he’d like to move there from his present home in central Taiwan to take advantage, among other things, of the four distinct seasons.

Inaka: Portraits of Life in Rural Japan is arranged from south to north, so it begins with the experiences of a former teacher in some of the remoter islands of Okinawa, notably Tanegashima, where she had to take a boat from one school to another. She was there at the time of the tsunami in 2011, though its force was considerably lessened by the time it reached her.

One of the most impressive chapters is by Stephen Mansfield, a potter who describes in extraordinary detail the ways local potters vary the surface of their creations using the natural minerals and the like in the local clays. His prose is superb, and his vocabulary exceptional.

The call of religion is what brings some of the writers to Japan, notably Brian Buke-Gaffney who spent nine years in Zen monasteries after following the “dharma bum” hippie road overland to India and then, being disappointed with what he found there, onwards east to Japan.

Another modern devotee follows the Shikoku Pilgrimage, agonizing for cans of cold Pocari Sweat as he struggles upwards through astonishingly high temperatures, only to find a drinks machine that won’t accept his damp banknote, and a public water supply that is orange with rust. The trail is 1,200km long and involves visiting (and getting stamps in your booklet from) 88 temples.

There are chapters on indigo and the musical instrument called the koto, neither perhaps hugely interesting in themselves but no doubt containing important information for those with a prior interest in the subjects.

Amy Chavez is a columnist on Japan Times and here contributes a chapter on the recent history of fishing in the Seto Inland Sea which has over 2,000 islands, not all inhabited. By visiting a number of fishermen she pieces together the industry’s decline, though not yet its fall.

Four chapters cluster round the center of Japan, near Kyoto. One tells of the search for the owner of a small but ancient shrine, another of life as the wife of a man who owns a large traditional house. The third recounts the exceedingly snowy winters in the area where the author taught English, and the last accounts the escape of a small tortoise. The snow-loving teacher now lives in the apparently equally snowy Slovenia.

A later chapter deals with the frustrations attendant on having a Japanese mother-in-law who uses lucky and (mostly) unlucky indicators to rule the roost over her foreign daughter-in-law. This is followed by a dissertation on the scanty attractions of the Ibaraki prefecture, routinely voted Japan’s least alluring.

Lesley Downer’s chapter on following Basho’s long road to the deep north is one of the best in the book. She ends by ascending the Three Mountains of Dewa, just as Basho did in the penultimate year of his life. She visits a temple at the top of the third peak, of which it’s forbidden to speak or write, a prohibition that she and Basho both observed.

Earlier she visits a village that had never seen a foreigner, and almost buys a house there for 2,000 English pounds (1990s value). But she feels she would hardly ever be there, despite the promises of the locals to look after it and sweep the snow off its roof every winter.

The final chapter is about a grand tour of Hokkaido’s coast by bicycle. It may be windy and with sometimes horrifying tunnels, but it sounds nonetheless like paradise. The author comes to the conclusion that going round the huge island clockwise is best. The Japanese drive on the left, so going clockwise ensures you’re always next to the sea, so having the best views. Unaware of this when he started, our author goes all the way anti-clockwise.

This fascinating and varied collection is edited by the indefatigable John Ross, the New Zealander who is one of the three organizers of Camphor Press. How he manages so much work I have no idea, but whether he stays in Taiwan (he lives near Chiayi) or does eventually move to Japan — which he admits that, though desirable, is very unlikely — his work rate is unlikely to slacken. As far as ex-pats go, he’s one of Taiwan’s living national treasures.

One of these authors lives, rather surprisingly, in East Malaysia’s Kuching, somewhere I wouldn’t mind living in myself. For the rest, Inaka: Portraits of Life in Rural Japan is an excellent book, and likely to promote tourism to the country. It may be the case that over 90 percent of Japan’s population now lives in urban areas, but this could prove no bad thing as far as its country districts are concerned.

Ribbon development is unlikely, and urban sprawl kept confined to areas already densely populated. Left to its own devices, traditional Japanese culture may breathe that much more freely, and tourists take the place of the departed local residents. The country may not be cheap to live or travel in, but its charms, as this book shows, are as varied as they are unique.