Toads are a symbol of prosperity and good fortune in Taiwan, but the unexpected discovery of an invasive species has officials and environmentalists scrambling to contain their spread.

With flashlights in hand and shielded by protective gloves, dozens of volunteers from the Taiwan Amphibian Conservation Society worked through the night searching rice fields and vegetable plots for their quarry — the cane toad.

There should be no reason for these large and highly toxic amphibians to exist in Caotun (草屯), a township in the foothills of the central mountain range. 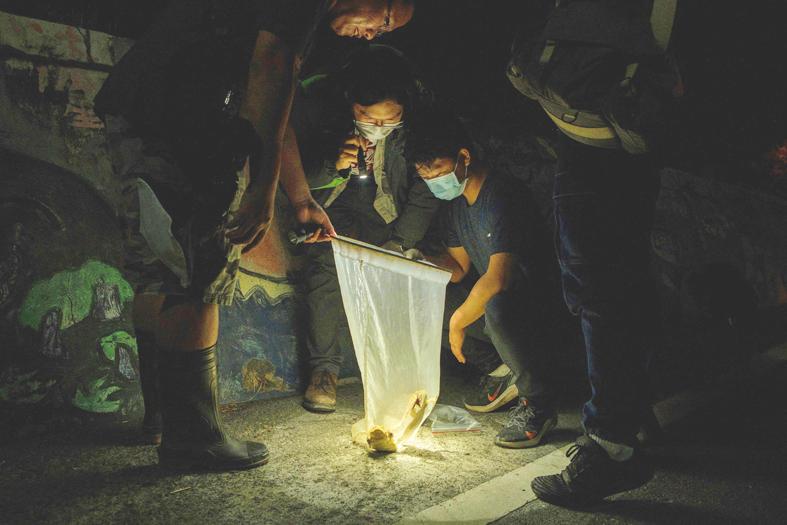 Cane toads are indigenous to South and Central America, and while they have wrought a famously destructive path through places like Australia and the Philippines, they had not been recorded in Taiwan.

That was until a few weeks ago when a local resident discovered some large amphibians hanging out in her community vegetable garden and uploaded a photograph online, a move that sparked an immediate toadhunt.

“A speedy and massive search operation is crucial when cane toads are first discovered,” Lin Chun-fu (林春富), an amphibian scientist at the government-run Endemic Species Research Institute said, as he explained why conservationists have since rushed to find and remove any cane toads. “Their size is very big and they have no natural enemies here in Taiwan,” he added.

Soon after the photo was uploaded, Yang Yi-ju (楊懿如), an expert at National Dong Hwa University, sent a group of volunteers from the Amphibian Conservation Society to investigate. They arrived at the vegetable garden and were shocked to find 27 toads in the immediate vicinity. She quickly identified the interlopers as Rhinella marina, thanks to the tell-tale large partoid glands behind the ears where cane toads secrete a dangerous poison.

“I was shocked and worried when they found more than 20. This is not going to be an easy thing to tackle,” she said.

“We began to notify and mobilize everyone to act,” she said, adding that the presence of juveniles showed the toads were breeding.

Cane toads are a dangerous invasive species for three key reasons. They are voracious predators, they are hugely successful at breeding and they are poisonous. That latter quality, a defense mechanism, is especially dangerous to dogs, which might lick or bite one.

Local farmers told conservationists they had noticed the arrival of these burly toads, but never reported it.

“Taiwanese farmers generally ignore toads and even look favorably at toads when they find them because they help rid the land of pests and are also a good luck symbol,” Yang said. “It never occurred to them that this is an invasive species from a foreign land.”

Conservation officials and environmental volunteers have been working non-stop to do a painstaking search.

“We have divided [the township] into 200 by 200 meters square grids to investigate one by one if there are marine toads present,” field researcher Lin Yong-lun said, pointing to a series of color-coded maps.

The search perimeter has since been expanded to a 4km radius.

So far, more than 200 marine toads of various sizes have been captured and housed at the Endemic Species Research Institute.

Cane toads are among the world’s “100 Invasive Alien Species” list compiled by the Invasive Species Specialist Group, an international advisory body of scientists and policy experts.

Also known as marine toads, their most common English name came from the fact that it was used in sugar plantations to hunt cane beetles. They were introduced into plantations in Australia, the Philippines, Japan, the Caribbean, as well as Florida and Hawaii, where they have caused damage to the local ecosystems.

Despite their warty appearance, toads are a symbol of wealth, longevity and good luck in Chinese culture. They are also used in Chinese medicine and their totems are common in feng shui to ward off bad luck.

“In store fronts you can find toad totems, drawings and even real live toads. It’s a symbol of fortune and good luck,” Lin said.

Until 2016 it was legal to import cane toads into Taiwan as pets, where they can fetch NT$3,000 to NT$4,000. Conservationists believe since imports were banned, people have started breeding cane toads locally and some have since escaped or been abandoned by their masters.

So far there have been no other reported sightings in Taiwan and Yang is cautiously optimistic about stopping the spread.

“Next spring during mating season is when we truly know for sure if we have contained it,” she said.