‘CAUTION’:
A Kaohsiung cluster that can be traced back to a ship in the harbor might be more complicated than other chains, Minister Chen Shih-chung said

The cases included 11 people associated with the airport, and 10 with the Omicron variant of SARS-CoV-2, reported in Kaohsiung, Minister of Health and Welfare Chen Shih-chung (陳時中), who heads the CECC, said at a daily news conference.

Another case was a direct family contact with an imported case, he said, adding that the domestic case is being investigated. 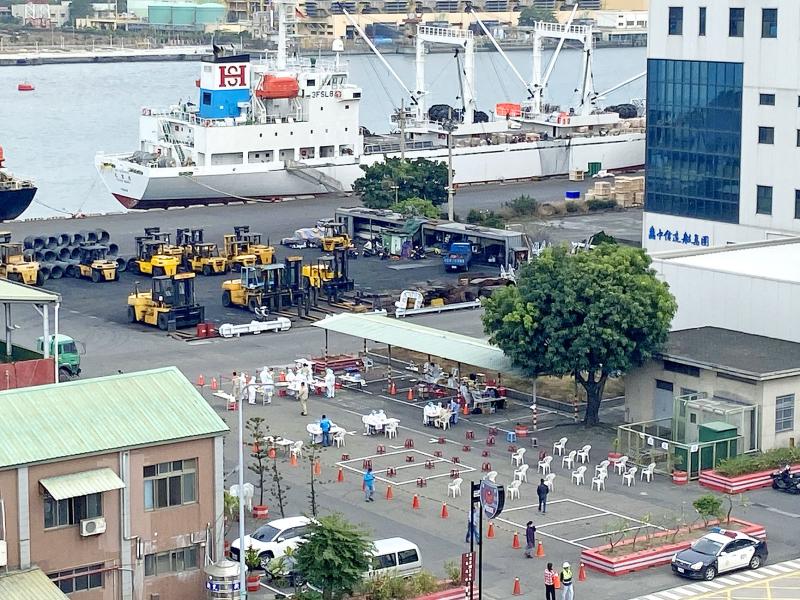 Even though Taiwan is seeing sporadic outbreaks across the country, most of them had traceable infection sources, Chen said.

“The situation might be clearer after the Lunar New Year holiday,” Chen said, but cautioned that the Kaohsiung cases were more complicated.

Those cases can be traced back to a maintenance worker at Kaohsiung Harbor, who might have contracted the disease when he came into contact with people on a Sierra Leone-flagged vessel, health officials in the city said yesterday.

The commercial vessel departed from the Philippines and was docked in Kaohsiung from Monday last week to Wednesday, the officials said, adding that it was next scheduled to dock at Jeju Island in South Korea.

Chen said it was likely that the man was infected on Thursday or Friday last week, adding that the CECC had informed its South Korean counterparts.

The man’s wife and child were on Thursday reported to have COVID-19, and seven Kaohsiung Harbor workers were confirmed yesterday, Chen said.

Three other Kaohsiung residents were infected at a local clinic that the man visited on Wednesday after he developed symptoms on Saturday, Chen said.

Of yesterday’s 23 new domestic cases, 15 were fully vaccinated against COVID-19, two had received one dose, three were unvaccinated, and the status of the other three was still under investigation, CECC data showed.

The nation yesterday also reported 45 imported cases, for which the CECC did not release the vaccination statuses.

The count of confirmed COVID-19 deaths remained at 851.