LIVE FEED:
Mission controllers said that the launch was a complete success as cameras sent back footage of the Earth, as well as astronauts in weightless conditions

The first astronauts for China’s new space station yesterday blasted off for the country’s longest crewed mission to date.

The three astronauts launched on a Long March-2F rocket for the Tiangong station — where they are to spend three months — in a much-anticipated blastoff broadcast live on state TV.

Liftoff happened at 9:22am from the Jiuquan Satellite Launch Center in China’s Gobi Desert, with the rocket rising in clouds of smoke against a blue sky. 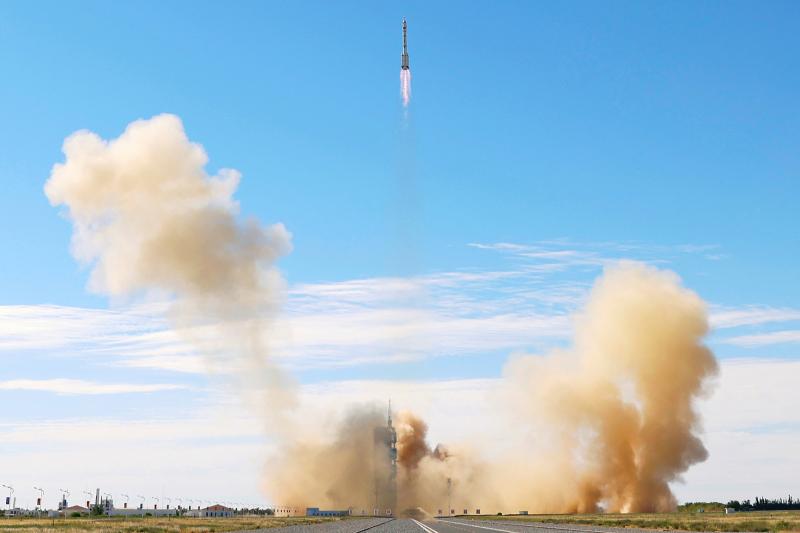 After about 10 minutes it reached orbit altitude and the spacecraft separated from the rocket to loud applause in the control room among rows of blue-suited engineers.

China Central Television showed a live feed from inside the spacecraft, with the three astronauts lifting their visors, and one smiling and waving at the camera.

Another floated a pen just above his lap as he browsed the flight manual.

Cameras outside the craft broadcast live images of the Earth.

At a ceremony before blastoff, the three astronauts, already wearing their space suits, greeted a crowd of supporters and space workers, who sang Without the Chinese Communist Party, there would be no new China.

The mission’s commander is Nie Haisheng (聶海勝), a pilot in the People’s Liberation Army Air Force who has already participated in two space missions.

The two other members are also members of the military.

Their spacecraft was to dock with the Tianhe main section of the space station, which was placed in orbit on April 29, possibly as soon as six hours after liftoff.

The module has separate living spaces for each of them, a “space treadmill” and bike for exercise, and a communications center for e-mails and video calls with ground control.

It is China’s first crewed mission in nearly five years.

Huang Weifen (黃偉芬) of the China Manned Space Program said that the astronauts would perform two spacewalks during the mission, both lasting six or seven hours.

To prepare for the mission, the crew underwent more than 6,000 hours of training, including hundreds of underwater somersaults wearing full space gear.

The China National Space Administration is planning 11 launches through the end of next year, including three more crewed missions to deliver two lab modules to expand the 70 tonne station, and supplies and crew members.

China has said it would be open to international collaboration on its space station, although it has yet to give specific details,

“There are a number of countries that have expressed a desire to do that and we will be open to that in future,” Zhou said.

Beijing in March said that it was also planning to collaborate with Russia to build a separate lunar space station.