CAUTIOUS START:
As the COVID-19 outbreak appears to be stabilizing, New Taipei City’s mayor said that starting today, restaurants in the city can resume dine-in services

The local case is a woman who cleans airplane cabins at Taiwan Taoyuan International Airport and has been confirmed to have the Delta variant of SARS-CoV-2, the CECC said.

The woman, who is in her 20s, developed a runny nose and dizziness on Sunday. She tested positive for COVID-19 two days later as part of routine testing of airport staff, the center said. 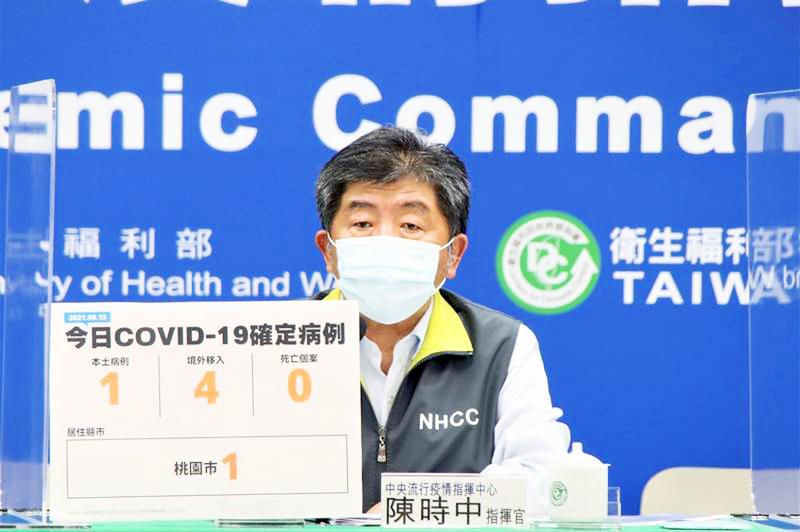 Photo courtesy of the CECC

Preliminary genome sequencing results show the woman has the Delta variant, but a more comprehensive analysis is needed to determine whether her case is connected to recent clusters involving the variant in Taiwan, said Centers for Disease Control Deputy Director-General Philip Lo (羅一鈞), who is the deputy head of the CECC’s medical response division.

As the woman cleans airplane cabins, the CECC is investigating whether she contracted the disease at work, he said.

The test results indicate she contracted the disease very recently, and 45 of her contacts are now in quarantine, the CECC said.

The woman received her first dose of the AstraZeneca COVID-19 vaccine in early June, it added.

At a separate press briefing, Taoyuan Mayor Cheng Wen-tsan (鄭文燦) said the city is testing employees at the company and its associated businesses, including China Pacific Catering Services.

Of the 42,827 people who work at the airport, about 95 percent have received one dose of a COVID-19 vaccine, while 74 percent have been fully vaccinated, he added.

Cheng said he would ask the CECC to allocate doses for airport employees to ensure their safety.

The woman visited two supermarkets in Taoyuan on Monday evening — a Pxmart on Fusing 2nd Road and a Carrefour on Wende 2nd Road, he said.

Among the four imported cases, three are Taiwanese who have returned from the US and the Philippines, and one is a French national traveling from France, the CECC said.

“The outbreak appears to be stabilizing and is moving in a positive direction … but we must remain cautious and solemn — particularly with the Mid-Autumn Festival around the corner,” he said.

The city would remain at a level 2 COVID-19 alert with strengthened protective measures until Tuesday next week, he said.

That means visitations at long-term care facilities and retirement homes are to remain suspended, hospital patients are allowed only one visitor at a time, and gatherings are limited to 50 people indoors and 100 people outdoors, he said.