South Korea yesterday said that it would lift COVID-19 restrictions on social gatherings next week as the country prepares to switch to a “living with COVID-19” strategy amid rising vaccination levels.

A new panel established this week is drawing up a plan for a gradual lifting of curbs, aiming to lift restrictions and reopen the economy next month on the expectation that 80 percent of the adult population will be fully vaccinated.

From Monday, the South Korean government is to allow gatherings of up to four unvaccinated people and ease operating-hour restrictions imposed on venues such as restaurants, cafes and cinemas, South Korean Prime Minister Kim Boo-kyum told a COVID-19 response meeting. 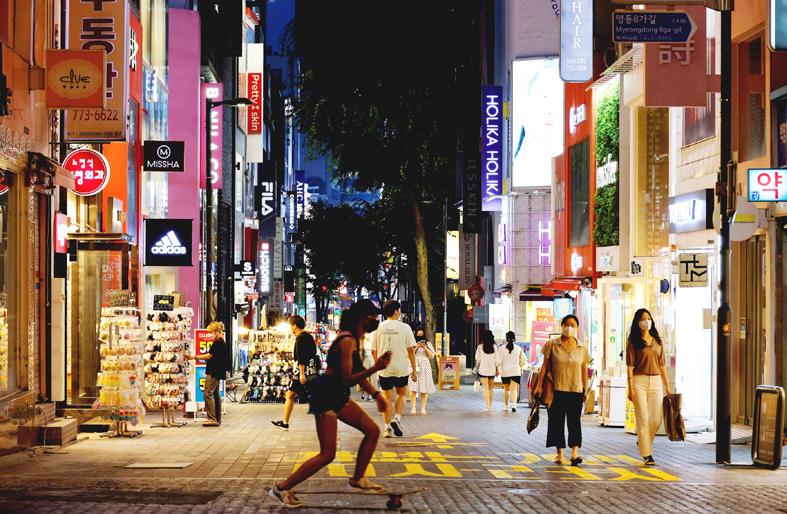 In the Seoul area, gatherings of up to eight people are to be allowed if a group includes four fully vaccinated people, while in other regions, up to 10 people will be allowed to gather.

South Korea never imposed a full lockdown, but has been under its tightest possible social distancing curbs, including a cap on gatherings of more than two people after 6pm since July.

The relaxation would also allow outdoor sports events to take place in front of crowds, rather than behind closed doors as at present, if 30 percent of all spectators are fully vaccinated, South Korean Deputy Minister of Health Lee Ki-il told a briefing.

“For the past year and eight months, everyone has done their best to find light at the end of a long tunnel — the pandemic — and the glimmer of light is getting closer,” Kim said. “The rest of October with two weeks remaining will be the final test to stepping towards restored routines.”

The new social distancing rules are to be imposed until Oct. 31, after which authorities are to announce a more inclusive strategy for small businesses and self-employed people, who have been hit hard by the curbs.