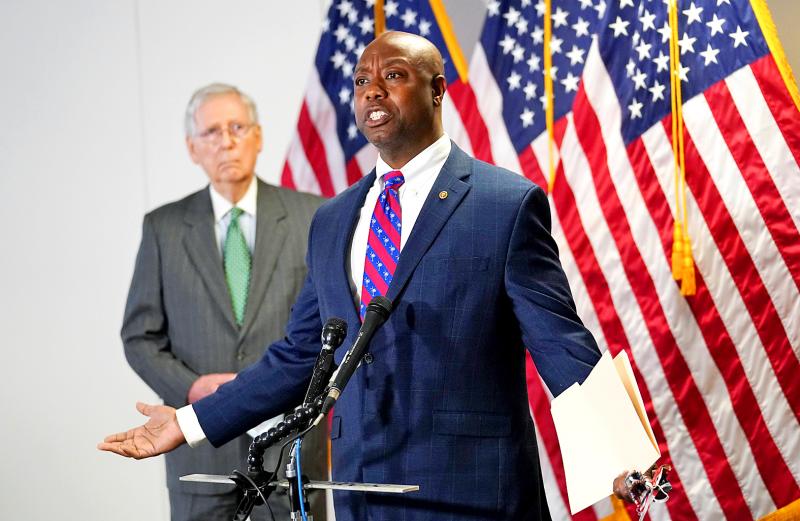 US Senate Democrats on Wednesday blocked a police reform bill, arguing that the Republican measure introduced after George Floyd died in police custody did not go nearly far enough.

Supporters of the Justice Act fell short of the 60-vote threshold 55-45, with just three Democrats joining Republicans in voting to advance the legislation.

The impasse has left the parties feuding over crafting new guidelines for police after weeks of protests.

Attention now turns to the US House of Representatives, where Democrats yesterday were to introduce their own police bill.

The Senate deadlock highlights how difficult it might be for the US Congress to negotiate a compromise on such legislation in the months before a presidential election.

Senate Majority Leader Mitch McConnell said that his party’s measure was a “first step” that would allow floor debate on police reforms, but that Democrats balked.

“The only way there is any downside for Democrats to come to the table is if they’d rather preserve this urgent subject as a live campaign issue than pass a bipartisan answer,” McConnell said.

The Republican proposal would discourage, but not ban tactics such as choke holds, a flashpoint issue given that Floyd died after a Minneapolis, Minnesota, police officer pressed his knee on his neck for nearly nine minutes.

It would provide for more de-escalation training and send officers’ use-of-force information into a national database aimed at weeding out bad cops.

It would not end or limit qualified immunity, a doctrine that protects police from being sued for misconduct, and instead of direct mandates, the measure would incentivize change by denying federal grants to police departments that do not end choke holds or no-knock warrants.

“The Republican bill does not even attempt one significant reform to bring more accountability to police officers who are guilty of misconduct,” Senate Minority Leader Chuck Schumer said.

The measure is so “irrevocably” flawed that “it can not serve as a useful starting point for meaningful reform,” Schumer said.

US President Donald Trump accused Democrats of sinking the Republican bill “because they want to weaken our police” and end officer immunity.

“We won’t sacrifice,” Trump said. “We won’t do anything that’s going to hurt our police.”

US Senator Tim Scott, who authored the Justice Act, said that about 70 percent of its reform provisions align with the Democratic proposals.

“I’m frustrated,” Scott said after the bill was blocked.