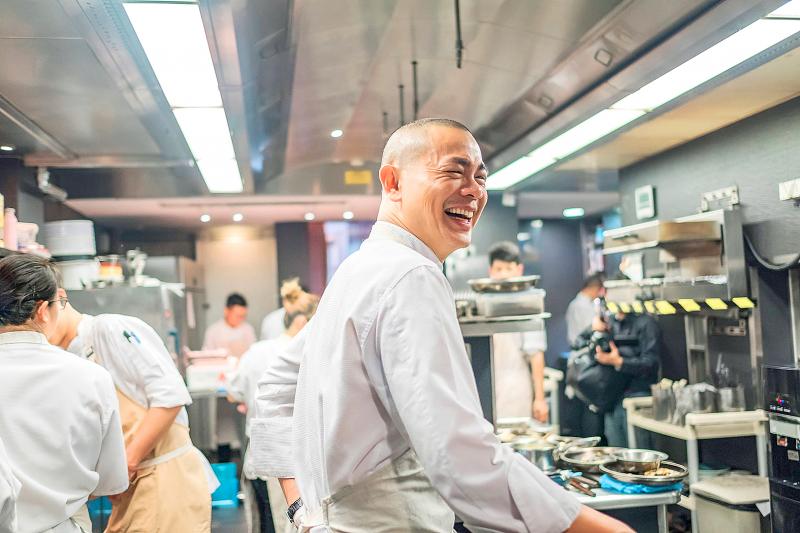 HOMEWARD BOUND:
Josiah Ng was intrigued by Chiang’s decision to close his Singapore restaurant and started making a film about the Taiwanese chef

A documentary featuring the first Taiwanese chef to be awarded a Michelin star, Andre Chiang (江振誠), is scheduled to be released at the end of August.

Chiang in 2010 opened Restaurant Andre in Singapore and it was rated a two-star restaurant by the inaugural Singapore edition of the Michelin Guide in 2016.

The restaurant in 2017 was ranked second-best in Asia and 14th in the world by Restaurant magazine.

Chiang was also presented with the 2018 Diners Club Lifetime Achievement Award for Asia, after Chiang on Valentine’s Day that year announced, without any notice to his employees, that he would be closing his restaurant in Singapore and returning to Taiwan.

Singaporean director Josiah Ng (黃程瀚) was intrigued by Chiang’s decision and started filming a documentary about the chef after securing his permission.

For the production of Andre & his Olive Tree (初心), Ng started shadowing Chiang a few weeks before the restaurant was closed, said Activator Marketing Co, which is publicizing and distributing the documentary in Taiwan.

Ng also interviewed Chiang’s wife and his employees at Restaurant Andre, before accompanying the chef on his return to Taiwan, the company said.

During the filming, Ng also explored the factors that helped nurture Chiang’s love for cooking, including childhood visits to Shilin Night Market in Taipei.

“This film is about people’s obsession for success and achievements in life, and the process they go through to find their own identity,” Ng said.

Each chapter in the documentary was named after the eight key elements in Chiang’s culinary “octaphilosophy” — salt, texture, memory, pure, terroir, south of France, artisan and unique, the company said.

On his decision to close the Singapore restaurant, Chiang said that we can define our own success without having someone giving us grades.

The documentary is scheduled to be released in Taiwan on Aug. 21.