NO CONNECTION:
Centers for Disease Control Deputy Director-General Chuang Jen-hsiang said the CECC has linked no deaths so far to the AstraZeneca vaccine

Eleven people in the nation have died after receiving the AstraZeneca COVID-19 vaccine, the Central Epidemic Command Center (CECC) said yesterday, but the deaths should not deter older people with chronic health conditions from getting vaccinated.

Nine of the deaths — people aged 65 to 97 — took place three hours to one day after the AstraZeneca vaccine was given, the center said, while eight of the 11 deaths were people aged 75 or older, most of whom had chronic health conditions.

On Wednesday, the center said that 12 more people — seven women and five men aged 42 to 97 at the onset of symptoms — had experienced serious adverse events suspected to be related to an AstraZeneca vaccination. 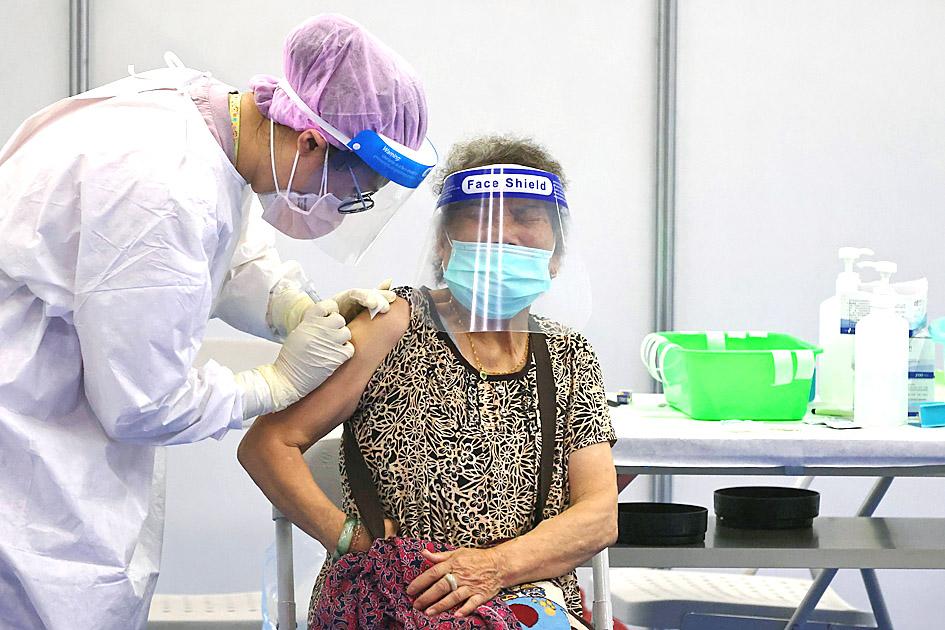 The center has seen how, in other countries, the death tally for elderly people, who might have underlying health conditions, tends to rise at the beginning of mass vaccination campaigns if that segment of the population is being prioritized, Centers for Disease Control Deputy Director-General Chuang Jen-hsiang (莊人祥), who is the CECC’s spokesman, told a news conference in Taipei.

To clarify whether such deaths were linked to vaccinations, health officials would need to review the medical records of the deceased or perform autopsies on them, Chuang said.

Demographic data from last year — compiled before people were being vaccinated against COVID-19 — show that an average of 200 people aged 75 or older die each day in Taiwan, he said, adding that so far, no deaths have been identified by the center as being caused by the vaccine.

Despite the 11 post-vaccination deaths reported, there have been no signs that fewer shots are being administered, Chuang said.

Reports of deaths following vaccinations should not deter people from getting vaccinated, Lo added.

“The virus will not wait for us to finish vaccinations before breaking out in a cluster,” he said.

The sooner people are fully vaccinated against the virus, the sooner personal and herd immunity can be established, he said.