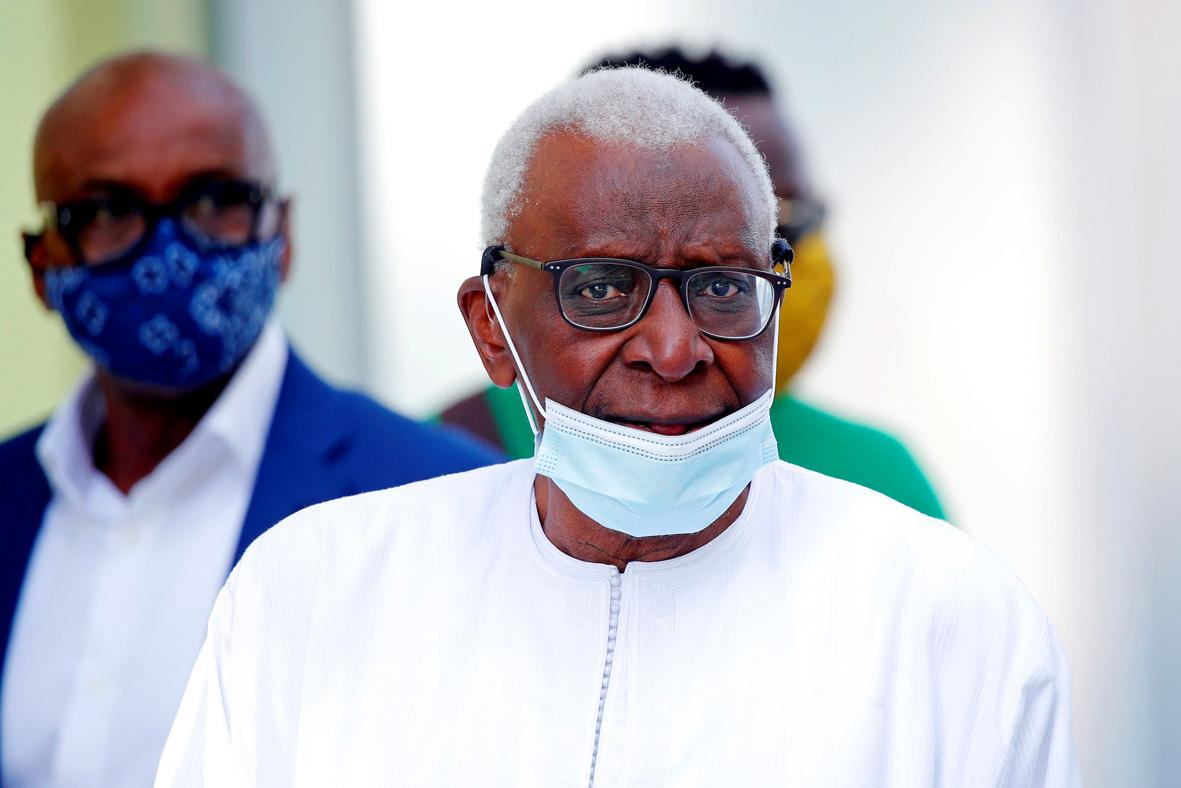 IN ABSENTIA:
A scheme hushed up the offenses of 23 Russian athletes so that they could compete in the 2012 Olympic Games and 2013 world championships

The former head of athletics’ world governing body, Lamine Diack, was on Wednesday found guilty by a French court of corruption in covering up Russian doping cases and sentenced to four years in prison, two of which were suspended.

The presiding judge in the court in Paris, Rose-Marie Hunault, said that Diack’s actions had “caused serious damage to the fight against doping.”

Other senior figures in track and field, including former IAAF marketing consultant Papa Massata Diack, Lamine Diack’s son, and former IAAF anti-doping head Gabriel Dolle, were also given prison terms for their part in a scheme that hushed up the doping offenses of 23 Russian athletes so that they could compete at the 2012 London Olympics and 2013 world championships in Moscow.

Papa Massata Diack, who was tried in absentia because Senegal had refused to extradite him, was sentenced to five years in prison and fined 1 million euros.

Previously one of the most influential figures in world sport, Lamine Diack was president of the IAAF from 1999 to 2015, when he was replaced by Britain’s Sebastian Coe.

The prosecution alleged that under the scheme, named “Full Protection,” individual Russian athletes paid 3.2 million euros in exchange for the IAAF’s anti-doping body to cover up their drug taking.

Lamine Diack told the court that it was his decision to waive bans after the athletes failed tests in 2011, but he denied knowing that officials from the body had directly or indirectly asked those athletes for payment to hush up their cases.

He said that he was acting to safeguard the “financial health of the IAAF,” because the federation was negotiating major sponsorship contracts with Russian bank VTB and a Russian broadcaster at the time.

Lamine Diack, who was decorated in the Kremlin in late 2011, denied taking an additional US$1.5 million of Russian funding to finance the successful campaign by Macky Sall for the Senegal presidency.

Lamine Diack, who was in court to hear his sentence, said that he would immediately lodge an appeal.

The judge said Lamine Diack was unlikely to go to prison, telling him: “Given your age you can expect conditional release.”

Dolle was sentenced to two years in prison suspended and fined 140,000 euros and lawyer Habib Cisse, who was Lamine Diack’s advisor, was given three years in prison, of which two were suspended.

Tried in absentia, Valentin Balakhnichev, a former Russian Athletics Federation president and former IAAF treasurer, was given a three-year prison sentence, while former coach Alexei Melnikov was given a two-year sentence.

Balakhnichev said that he, too, would appeal, telling Russian agency Ria Novosti that French authorities “deprived me of my legal right to defend myself and said I did not cooperate with the investigation, which I categorically deny.”

Reacting to the verdict, World Athletics said that it was grateful for the 16 million euros compensation that the court ordered those found guilty to pay and that new structures were in place to prevent such practices from ever reoccurring.

“Whilst we are disappointed this happened in our sport, we are grateful for the strong and clear decisions that have been taken against the individuals involved and charged with these crimes, and we would like to reassure everyone that the reforms our congress approved in 2016 will ensure that similar actions by individuals can never happen again in our sport,” the federation said in a statement.

“As the court acknowledged, this damage has impacted World Athletics’ image and reputation in a deep and lasting way,” the federation added. “We will do everything we can to recover the monies awarded, and return them to the organization for the development of athletics globally.”