STRUGGLING TO SURVIVE:
Chunghwa Express workers called for a 5 percent increase in pay, which has been stagnant for 17 years, or they might go on strike

Members of the Chunghwa Express Union yesterday held a protest in front of the Ministry of Transportation and Communications building, saying that the express delivery firm has not adjusted workers’ salaries for 17 years.

The express delivery firm is a subsidiary of state-run Chunghwa Post, which owns about 50 percent of its shares, with the other half held by private investors.

The protesters said they would not rule out going on strike at the end of this month if Chunghwa Express’ board refuses to approve a raise. 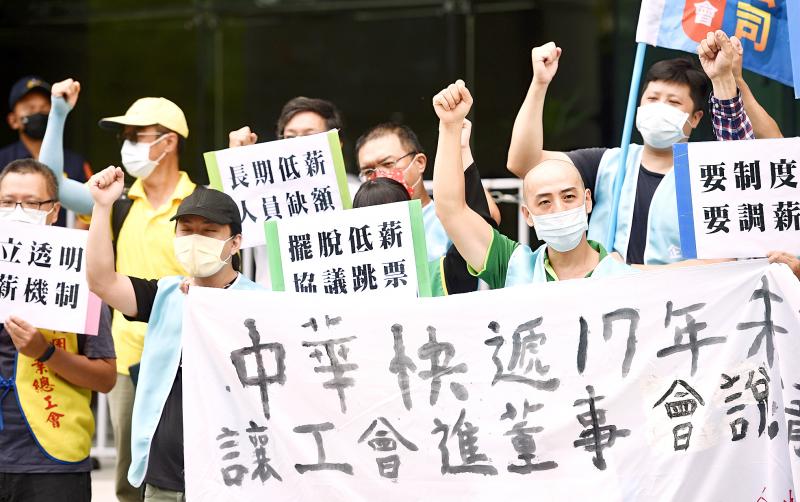 They also asked that union representatives be allowed to attend a board meeting that is to be held at the end of this month to discuss the pay raise proposal with board directors and supervisors.

Chunghwa Express’ financial statements showed that its net profit rose from NT$63 million (US$2.27 million at the current exchange rate) in 2017 to NT$75 million in 2019, the union said, adding that workers’ contributions to this impressive performance should not be ignored.

Directorate-General of Budget, Accounting and Statistics figures showed that the consumer price index rose from 86.3 in 2005 to 104.92 last month, the union said, adding that workers can no longer keep up with the rising cost of living.

Last year, the average monthly salary for workers in the transportation and warehousing industry was NT$55,097, it said, citing data from the ministry.

Meanwhile, the basic monthly salary for an entry-level Chunghwa Express employee was less than NT$25,000, the union said.

Adding full-attendance bonuses and overtime pay would only raise that figure to NT$26,000 a month, it said.

“How can a worker survive and raise a family with such a low salary?” the union asked.

Union members early this year voted to go on strike if management continues to disregard their requests for a wage hike.

“We are asking for a 5 percent raise for the company’s 200 ground-level workers. Such an adjustment would only lead to an annual increase in personnel costs of NT$3 million, which a company earning NT$75 million per year can easily absorb,” it said.

While the express delivery firm has argued that it added a meal subsidy of about NT$1,200 to NT$1,700 per month to workers’ salaries in 2015, the union said it was an incentive and should not be confused with a pay raise.

“We were told that all board directors and supervisors appointed by Chunghwa Post supported the union’s pay raise plan, but that its private investors opposed it,” the union said.

“We hope that private investors can understand the struggle that workers have been through over the years and approve the proposal at the upcoming board meeting,” it said.

“Board directors and supervisors appointed by the postal firm should actively persuade private investors to give workers a raise, rather than passing the buck,” the union said.