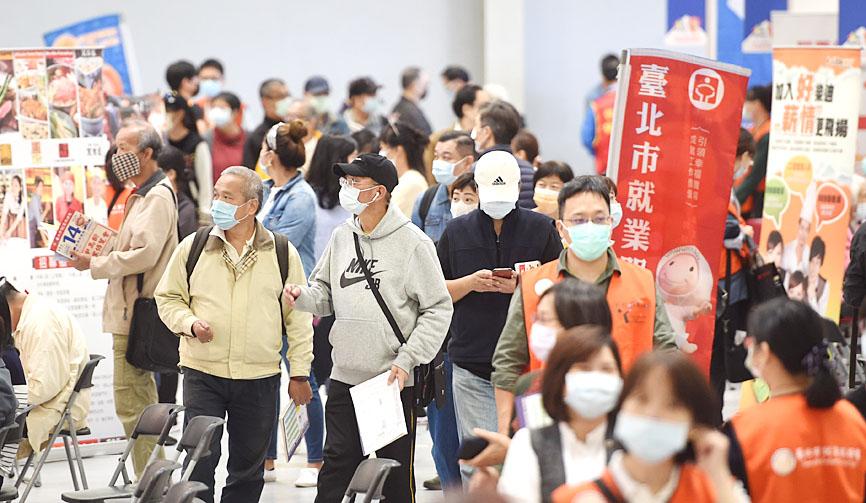 LIKE FINE WINE:
The labor participation rate among people aged 60 to 64 was 36.7 percent last year, compared with 71.9 percent in Japan, a DGBAS official said

Taiwan is projected to become a super-aged society by 2025, and already its rapidly aging population has created gaps in the workforce, the Directorate-General of Budget, Accounting and Statistics (DGBAS) said.

The labor participation rate among those aged 45 to 49 in Japan was 88.5 percent last year, followed by 84.7 percent in Taiwan, the US’ 83 percent and South Korea’s 81.1 percent, Department of Census Deputy Director Chen Hui-hsin (陳惠欣) said on Nov. 8.

The participation rate among workers aged 65 or older was even lower than the 50-or-older group at only 8.32 percent, Chen said.

Previously, the late-middle-aged participation rate was lower due to the prevalence of higher education, which delays the time for people to enter the job market, she said.

Although the situation has improved over the past decade, the rate was still lower than other major economies, she said, adding that a higher retirement age was also a factor.

A breakdown of the participation rates of different demographics over the past 10 years shows that the male late-middle-aged group had negative growth in the first few years, before rising to 76.5 percent last year, 0.8 percent higher than in 2009, she said.

The female participation rate in the same age group grew every year during the period, reaching a peak of 51.1 percent last year, 5.9 percent higher than in 2009, she said.

The difference between the participation rates of male and female workers has narrowed from 30.5 percent in 2009 to 25.3 percent last year, Chen said.

The participation rates among men and women aged 45 to 64 are 76.3 percent and 52.2 percent respectively this year, with a difference of only 24.1 percent, a new low, she added.

In the 45-to-49 age group, the participation rate among men and women this year was 95.1 percent and 74.8 percent respectively, she said.

The rate was 74.4 percent among people aged 50 to 54, while the rates among males and females was 87.9 percent and 61.5 percent respectively, she said.

The participation rate among people aged 60 to 64 was 36.7 percent, with male and female rates of 50.2 percent and 24.1 percent respectively, she added.

Compared with 2009, the participation rate in each age group increased last year, particularly among males aged 50 to 54, which saw an increase of 6.3 percent, and among females aged 45 to 49 and 50 to 64, both of which increased by 11.9 percent, said a DGBAS official, who declined to be named.

The older the age group, the wider the difference in its participation rate compared with major economies, the official said, citing the 36.7 percent participation among people aged 60 to 64, which was 71.9 percent in Japan, 62.1 percent in South Korea and 57.5 percent in the US.

The difference in the participation rates between males and females in each age group ranges from 20.3 percent to 28 percent in Taiwan, close to South Korea’s 20.8 percent to 24.2 percent, but higher than the US’ 11.6 percent to 11.9 percent and Japan’s 14.5 percent to 24.7 percent, the official said.

The Ministry of Labor has rolled out economic incentives for business owners to hire late-middle-aged workers under the Act to Promote the Employment of Middle-aged and Senior Workers (中高齡及高齡者就業促進法).

The act, which cleared its third reading at the Legislative Yuan in November last year, prohibits employers from discriminating against older people when hiring or evaluating their performance. It also prohibits differential treatment, such as salary levels or company benefits, based on a person’s age.

Employers who hire unemployed people aged 45 to 65 could qualify for a monthly subsidy of NT$13,000 per person for 12 months under the act.

Ministry official Shih Shu-hui (施淑惠) said that while some are concerned that the act would eliminate job opportunities for younger people, the ministry believes that younger people should not compete with older people in the job market, but instead cooperate.

Policy tools to assist young people in finding jobs are also in place, Shih said, adding that different generations can learn from each other.