SINCERE PLEDGE?
‘The police will change this year,’ Greek Minister for Citizen Protection Michalis Chrisochoidis said on a day when police had used tear gas on protesting students

The Greek government on Thursday pledged to limit its use of tear gas, vowing that it is only to be used as a “last resort.”

Police routinely use tear gas indiscriminately as a deterrent, even at demonstrations where violence is limited to a few dozen people.

“The police will change this year,” Greek Minister for Citizen Protection Michalis Chrisochoidis told reporters, speaking on a day when police had used tear gas to hold back protesters at a student demonstration. 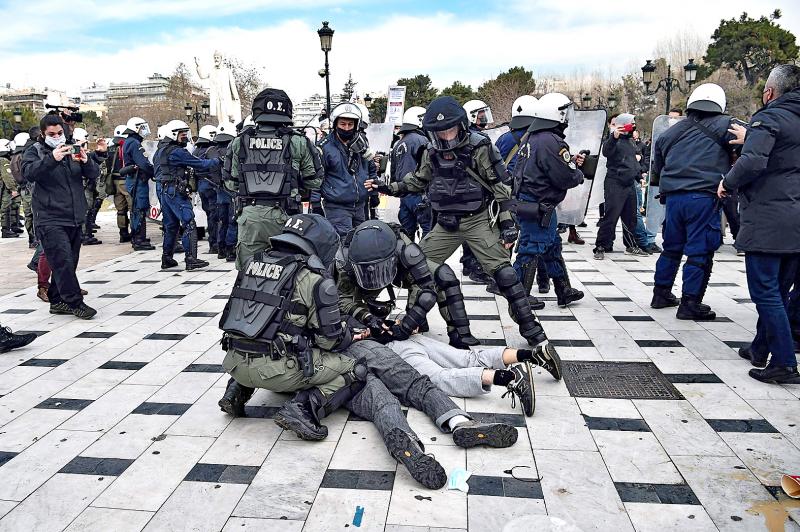 The plan says that protesters are to be warned via loudspeaker to disperse before the police use force in the form of water cannons, tear gas or flash grenades.

Protests in Greece are poorly regulated by organizers to keep out troublemakers, and usually result in skirmishes between riot police and hooded youths hurling stones and firebombs.

On Thursday, tear gas was used in Thessaloniki to beat back students who were trying to muscle through a riot police cordon, during a protest against plans to create a special police force to patrol universities.

A similar pledge to limit the use of deterrents had been made by a previous government in 2012, but was never carried out.

In another move that has raised eyebrows, the minister also said that reporters would have “designated areas” to cover protests.

He added that this measure was designed to protect media and would “absolutely not” impede their ability to work.

On Wednesday, Greek lawmakers overwhelmingly approved legislation to extend the country’s territorial waters along its western coastline from 6 nautical miles to 12 nautical miles (11km to 22km).

In the 284-0 vote, representatives of four opposition parties backed the government, while members of the Greek Communist Party abstained.

Although the move does not directly affect an ongoing maritime boundary dispute with Turkey, Greek Prime Minister Kyriakos Mitsotakis told the Hellenic Parliament that Greece was adopting a more assertive foreign policy.

“It’s a clear message to those who are trying to deprive our country of this right,” Mitsotakis said.