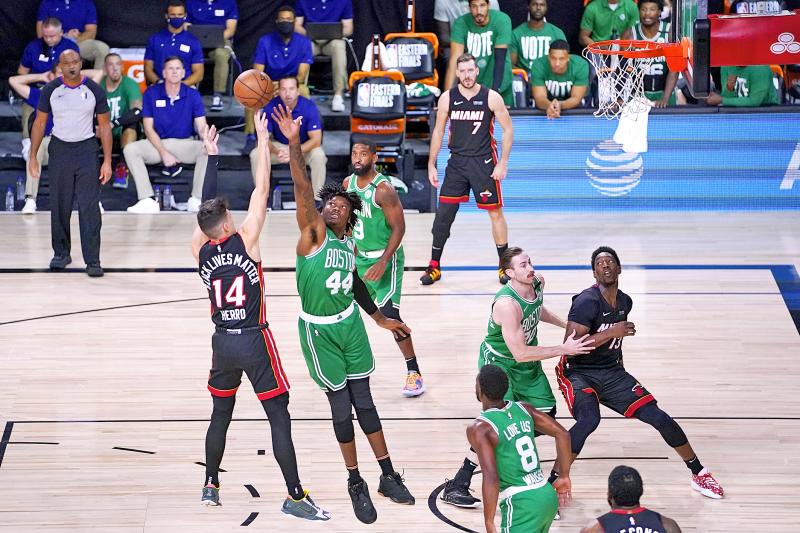 JUST ‘ANOTHER DAY’:
Herro’s point total was the second-most in a playoff game for a player aged 20 or younger, behind only Magic Johnson, who had 42

Rising star Tyler Herro on Wednesday scored a career-high 37 points and Jimmy Butler chipped in 24 as the Miami Heat seized command of the Eastern Conference final series with a 112-109 win.

The 20-year-old rookie Herro made five of 10 threes as Miami took a 3-1 lead in the best-of-seven series in the NBA’s quarantine bubble in Orlando, Florida.

Herro’s point total is the second most in a playoff game for a player 20 or younger, behind only Magic Johnson, who had 42.

The win moved them to within one victory of an NBA Finals berth, which they will try to secure today in Game 5.

“Not too many people get an opportunity to make it this far in the playoffs and be in a game like this, but for him it’s another day in the office,” Butler said of Herro. “He’s just going to keep playing basketball the right way.”

Goran Dragic had 22 points, while Bam Adebayo added 20 points and 12 rebounds for Miami, who rebounded from just their second loss of the post-season in Game 3.

Jayson Tatum scored a team-high 28 points, all coming in the second half, and Jaylen Brown had 21 for Boston, who were looking to win consecutive playoff games for the first time since the start of their second-round series against the Toronto Raptors.

The Celtics turned the ball over 19 times in the game.

“We’ve got to do a better job of handling the ball and taking care of it,” Boston coach Brad Stevens said.

Miami went on a 10-4 run at the end of the first half after Hayward hit a pair of free throws to tie the score 40-40 with 3 minutes, 38 seconds left in the second.

“Just trying to get a rhythm going early,” Herro said. “Once you see a couple shots go down, the rest of the game is easier for you. Tonight was definitely a good night.”

Herro nailed a three-pointer with just over four minutes left in the fourth quarter to give Miami a 98-90 lead.

Brown made a three-pointer and Smart dropped in a layup to get the Celtics within three, but Dragic and Butler each made baskets to pad Miami’s lead.

Dragic responded from beyond the arc and Herro added a layup to put Miami up by nine with 56 seconds left in regulation. Boston made it to within three again on a Brown three-pointer with 16 seconds to go, but free throws by Herro and Butler sealed the victory.