Tong Ying-kit (唐英杰), a waiter, faced as long as life in prison after being found guilty of incitement to secession and engaging in terrorist activities earlier this week.

The convictions stem from an incident last year when Tong drove a motorcycle carrying a flag with the banned slogan “Liberate Hong Kong; revolution of our times” into a group of police officers, injuring three. 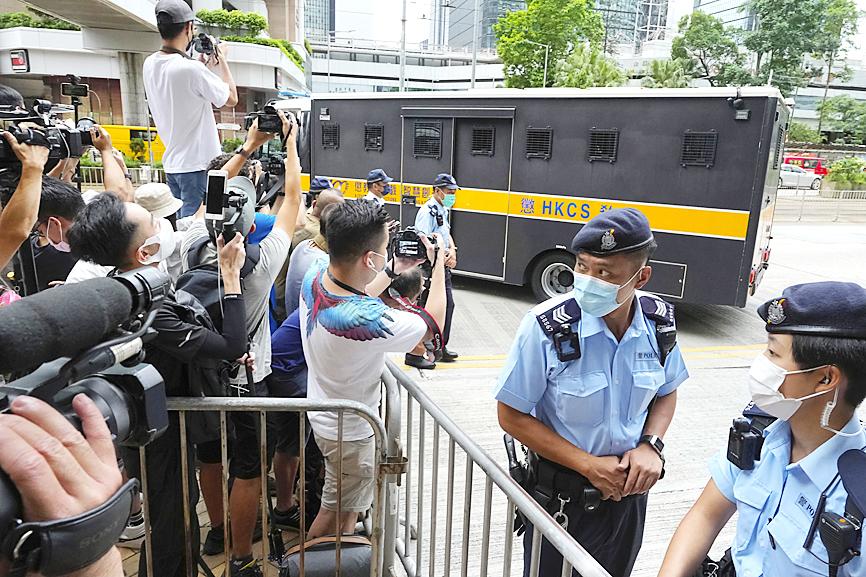 Tong was given 6.5 years for the secession charge and another eight years for the terrorism offense, served concurrently in part for a total of nine years, a panel of High Court judges ruled.

The ruling came the same day police arrested a man who allegedly was booing China’s national anthem at a Hong Kong shopping mall during the live broadcast of an Olympic gold medal ceremony.

Tong’s lawyer, Clive Grossman, said his client would appeal both the conviction and the sentence.

The government welcomed the guilty verdict and would study the sentencing to consider its next steps, Hong Kong Secretary for Security Chris Tang (鄧炳強) told reporters after the ruling.

Prosecutors in Hong Kong can appeal a sentence that a court hands down to seek a longer one.

The US criticized the conduct of the trial, which it said “ensured an unjust outcome.”

In a written statement, a US Department of State spokesman said that the US was deeply concerned that Chinese officials were deploying the security law “as a political weapon to silence dissenting voices in Hong Kong and suppress protected rights and fundamental freedoms.”

Yamini Mishra, Asia-Pacific director for Amnesty International, said that “the ruling essentially outlaws a popular slogan widely used by the pro-democracy movement and could enable future convictions of numerous other protesters who used it.”

Seventy-six democracy advocates, former politicians and journalists are awaiting trial after being charged under the legislation, according to the security bureau.

That figure includes student activist Joshua Wong (黃之鋒), who was the subject of a Netflix documentary, and Jimmy Lai (黎智英), the media mogul whose pro-democracy newspaper was forced to close.