Brutal militant violence forced them to flee their homes, but hunger has driven some in Mozambique to risk their lives by sneaking back to their old residences to gather food — or even resume farming.

Nearly 670,000 people have been displaced by an extremist insurgency that has raged for three years in northern Mozambique.

Some have moved in with host families, some are living in temporary shelters, while others have resettled in newly created safe villages. 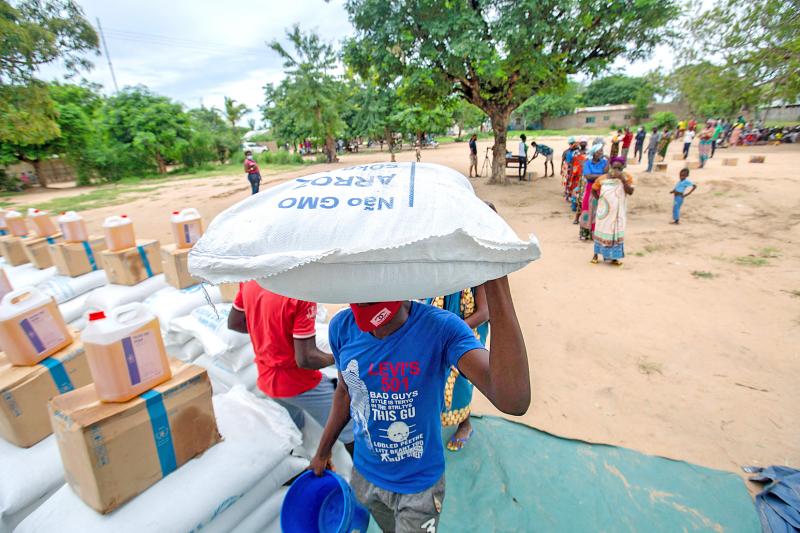 A critical lack of food has led to a brave few returning to their old homes to forage for whatever they can.

Lal Dady said that one day he left his new home in the Metuge resettlement camp to scour his granaries in Quissanga, a district in Cabo Delgado Province, where militants are waging their bloody campaign.

“I got chestnuts and other food products to feed my family,” said the 22-year-old father of one.

Mussa Cesar, 43, said that he goes back to Quissanga — an eight-hour walk — to work on his old farmland.

“I have been going to Quissanga for my field. I stay there around three days, cultivating and then come back,” he said, sitting under a tree and playing a traditional game with friends.

“And I bring back manioc for my family here,” he said. “We just don’t do the fishing, because we are afraid.”

Attacks by militants affiliated with the Islamic State skyrocketed last year in the gas-rich province, triggering a humanitarian crisis.

The number of violent incidents has dropped significantly, according to Armed Conflict Location and Event Data Project data, but the security situation remains precarious across the province.

Local authorities warned reporters not to use some roads not far from the resettlement camps, because they were unsafe.

Villagers in the far-north Palma district, the home of a multibillion-dollar natural gas project targeted by the militants, are particularly vulnerable.

The UN’s World Food Programme (WFP) distributed vouchers in December last year and last month, which locals use to buy food from shops.

Cristina Graziani, head of the WFP field office in the provincial capital, Pemba, said that the program was “difficult to sustain because the stores are facing the same difficulties to restock commodities in Palma.”

Even before the insurgency struck, Cabo Delgado was already one of the poorest provinces in Mozambique, itself ranked among the world’s poorest countries.

The UN announced this week that 1.3 million people in Cabo Delgado and neighboring Niassa and Nampula provinces are in need of humanitarian aid, with 950,000 facing “severe hunger.”

The scramble for food is evident in the Pemba neighborhood of Paquite Quete, where many displaced people have moved in with locals.

Locals have complained that they are being excluded from humanitarian food aid, despite having taken in extra mouths to feed.

Widow Josina Fernando, 34, who is hosting 30 people who fled from the hard-hit district of Macomia, is angry at not being considered for food handouts.

“One day there was a distribution and I went there, but was sent away,” she said.

Some of the displaced also say they are missing out.

Fernando’s neighbor, Nassab Hassane, fled from Macomia and now lives with 27 people in the home of a family member.

He said he has not received any help since arriving in Pemba four months ago.

“We never have received any vouchers. I don’t even know the color of a voucher. They give them to the natives, not to refugees who are eligible,” the 44-year-old said.

Graziani said that aid is channeled to those who have been registered.