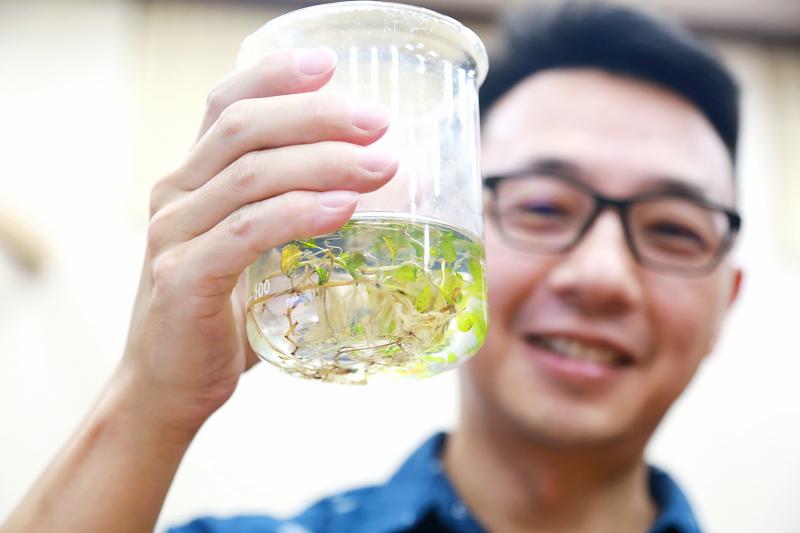 CARBON SINK THREATENED:
Seagrass near the Pratas Islands can capture up to 120,000 tonnes of carbon annually, but it has been dying out, a researcher said

Researchers from National Sun Yat-sen University (NSYSU) and the University of Ruhuna in Sri Lanka have identified previously ambiguous types of seagrass, including the world’s first hybridization between two particular species, potentially contributing to conservation efforts for the important carbon fixers.

A study published last month in the journal PeerJ used genetic as well as morphological examination techniques to identify various types of Halophila seagrass, whose features are often difficult to distinguish by sight alone.

“By using only a morphological approach, the genus could be over-split or similar species could be erroneously lumped, thus masking its true biodiversity,” the paper’s abstract says.

The study was the world’s first to use molecular identification techniques on seagrass in Sri Lanka, said Vanson Liu (劉商隱), an assistant professor in NSYSU’s Department of Marine Biotechnology and Resources.

Seagrass is distributed in most areas around Taiwan, and have been relatively thoroughly researched near the Pratas Islands (Dongsha Islands, 東沙群島) and Penghu County, Liu said.

However, some seagrass meadows are disappearing due to human activity near the shore, leaving only small patches that are often overlooked, he said.

Only 12 species of seagrass have been recorded near Taiwan, although comprehensive, long-term research is lacking, he added.

Seagrass is particularly important for the environment, as they are major carbon sinks, Liu said.

Previous research has shown that every square meter of seagrass near the Pratas Islands is capable of capturing about 1 tonne of carbon each year for a total of 120,000 tonnes annually, he said.

However, seagrass has become less abundant around Taiwan in the past few years, with 2014 in particular seeing a major die out near the Pratas Islands, he added.

As atmospheric carbon continues to rise, Taiwan should monitor the diversity of its seagrass meadows and improve scientific education to convey their importance, Liu said.