The Chinese Nationalist Party (KMT) would use its online platforms to help promote sales of domestic pineapples, KMT Chairman Johnny Chiang (江啟臣) said yesterday, as a Chinese ban on imports of the fruit from Taiwan took effect.

China’s suspension of pineapple imports from the nation has had a serious effect on the domestic pineapple industry since it was announced on Friday, Chiang said while meeting pineapple growers in Tainan.

Besides pineapples, many other local fruits, such as wax apples, are exported to China, he said. 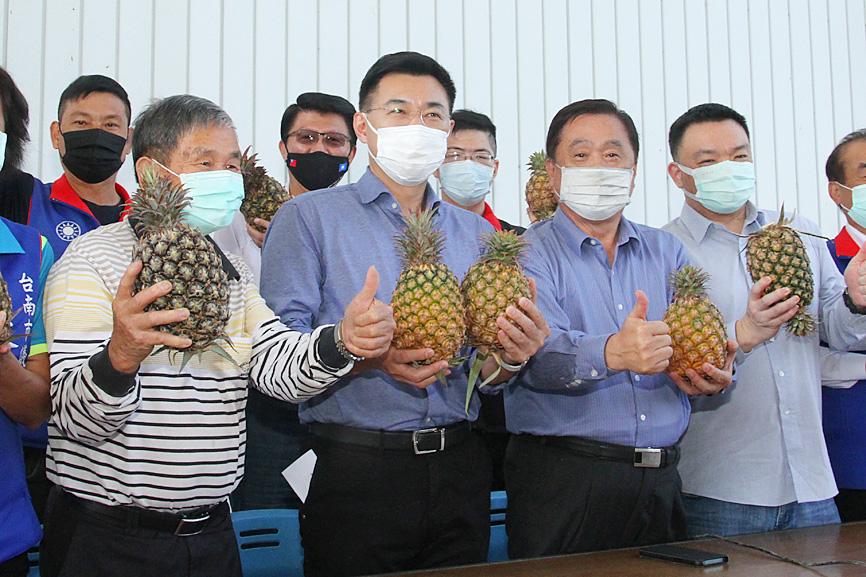 “Taiwan’s fruits have always been very high-quality, and we certainly hope to sell them to more countries,” he said.

However, he added that unlike exports of electronic products, fruit exports are restricted by factors such as their freshness, making the Chinese market important for domestic farmers.

He urged Taipei and Beijing to discuss technical and inspection-related issues, and proposed that inspections be performed in batches, with only the problematic imports returned, adding that this would mitigate the losses experienced by pineapple growers.

Chiang said he has asked the 14 KMT mayors and county commissioners to join forces to help support domestic pineapple growers and other farmers with any available resources.

The KMT would also use its online platforms to help domestic growers sell pineapples, he said.

The Democratic Progressive Party had promised farmers that it would help them develop new markets besides China, Chiang said, urging the government to fulfill its pledge.

Lin also urged Beijing to enter discussions with Taipei to find solutions to pineapple export-related issues, saying that negotiations between the US and China took place even amid their trade dispute.

“Optimistically, perhaps this is an opportunity to ease tensions between the two sides” of the Taiwan Strait, Lin wrote.

Former KMT chairman Eric Chu (朱立倫) on Sunday wrote on Facebook that while the government and public should support local growers by purchasing pineapples, he wondered how long the approach could last.

“This time it is pineapples. Next time will it be mangoes? Sugar apples? Wax apples?” he wrote.

He said that while President Tsai Ing-wen’s (蔡英文) administration has been promoting the New Southbound Policy since it took office in 2016, the nation’s economic and trade dependence on China has grown instead of falling.

The government owes fruit farmers an apology, and the public an explanation, he said.