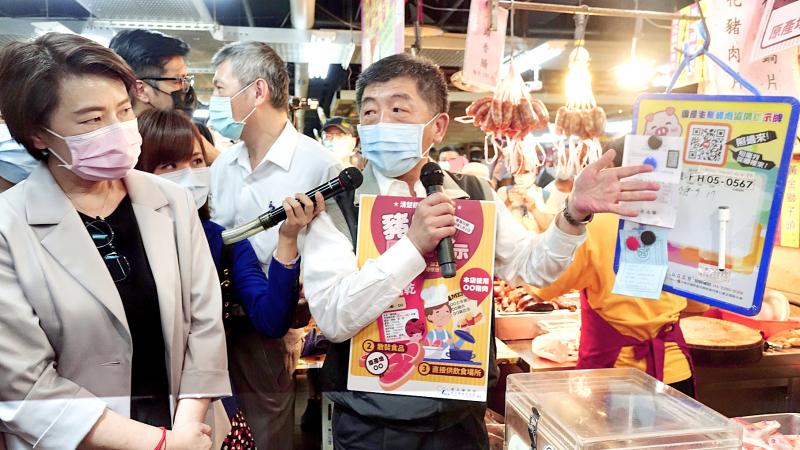 Minister of Health and Welfare Chen Shih-chung (陳時中), accompanied by Taipei Deputy Mayor Vivian Huang (黃珊珊), yesterday conducted an inspection tour of Taipei’s Dihua Street (迪化街), talking to vendors and members of the public who expressed concern over the government’s lifting of the ban on imports of US pork products containing ractopamine.

The central government is using Dihua Street’s traditional market for a pilot project on labeling indicating the place of origin of pork products.

The move came after an announcement by President Tsai Ing-wen’s (蔡英文) administration late last month that it was easing restrictions on imports of pork products with traces of ractopamine, as well as allowing imports of beef products from cattle older than 30 months starting on Jan. 1 next year.

“The Dihua Street market has already implemented origin labeling and we thank all vendors here for their cooperation,” Chen said. “We will establish a communication platform to continue talking with the local government to ensure food safety.”

“People are concerned about the labeling of US pork imports, so I came here today to check and see if there are problems,” he said. “It is good to know that the Taipei City Government has put in a lot of work into this project.”

Asked by a member of the public about the risk of fraudulent labeling, which is a persistent problem, Chen said that some shops already have QR codes to check and verify information, but the government needs to build up a comprehensive database and link up data from central and local governments.

“We have to sit down and discuss how to set up a convenient platform for regular inspections and authentication, and to establish compliance rules that everyone has to follow,” he added.

Huang said the city government has three major goals in mind, including managing the supply source from port of entries to distribution of meat products, as well as ensuring and verifying that labeling of the origin of all food products in restaurants, eateries and food vendors are authentic and correct.