PAIN:
ILIB therapy has long been used to treat other conditions, before new research showed its positive results on treating migraines

In one case, a woman who had had migraines for 20 years was cured in about a month using intravascular laser irradiation of blood (ILIB) therapy, the hospital said.

The method has long been used to treat a variety of conditions, including chronic pain, autonomic nerve disorders, cognitive dysfunctions and even strokes, but new research by the hospital suggests it could also treat chronic migraines, Department of Physical Medicine and Rehabilitation director Chang Shin-tsu (張幸初) told a news conference on Nov. 17. 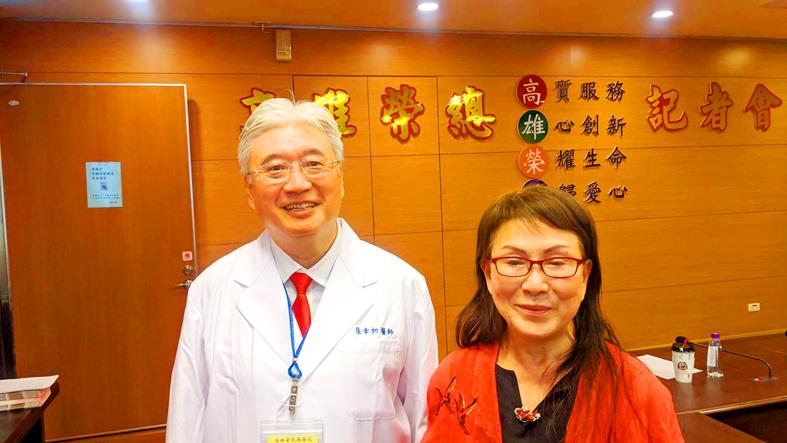 The woman, surnamed Lee (李), said that when she visited the clinic in October, she had been experiencing debilitating migraines at least once a month for 20 years.

At its worst, the pain would extend down from the left side of her head to her ear, making her dizzy and nauseous, Lee said.

She would lose sleep due to the sudden pain, which often came in the middle of the night or during meal times, she added.

However, doctors have been unable to find the cause, suggesting only pain medication for treatment, Lee said.

“I just thought this was my life, devoid of happiness,” she said.

After undergoing ILIB, Lee reported a marked improvement that has brightened her outlook on life.

Chang said he initially thought Lee would need three rounds of ILIB, based on previous trials, but she already showed positive results after two.

ILIB is an intravenous treatment in which a patient’s blood is “sunbathed” in low levels of laser radiation to stimulate interactions between molecules, Chang said.

Doing so can regulate mitochondria numbers and metabolic activity, improve stress and pain responses, and improve oxygen-carrying capacity, he added.

In the case of migraines, the therapy appears to help by restoring circulation in the frontal lobe, he said.

One round involves 10 one-hour treatments over 10 days, Chang said, adding that a patient can undergo the next round after resting for one to three weeks.

Considering its promising effects, the hospital said it would add more ILIB rooms to serve people across the Kaohsiung area.

However, Chang said that medication is still the best way to treat mild headaches, while those who have recently had a stroke or have epilepsy should not undergo ILIB therapy.