The Aviation Police Bureau on Tuesday reprimanded and transferred an inspection officer for disparaging his position, after he wrote that working for the bureau was like “living in retirement.”

In a statement for a correspondence school, security and inspection officer Chen Yi-lun (陳以倫) said that in his seven years working at the bureau he had not handled any cases or issued a single ticket.

“Every day is living in retirement,” even leaving time to study for the Central Police University entrance exam, he said. 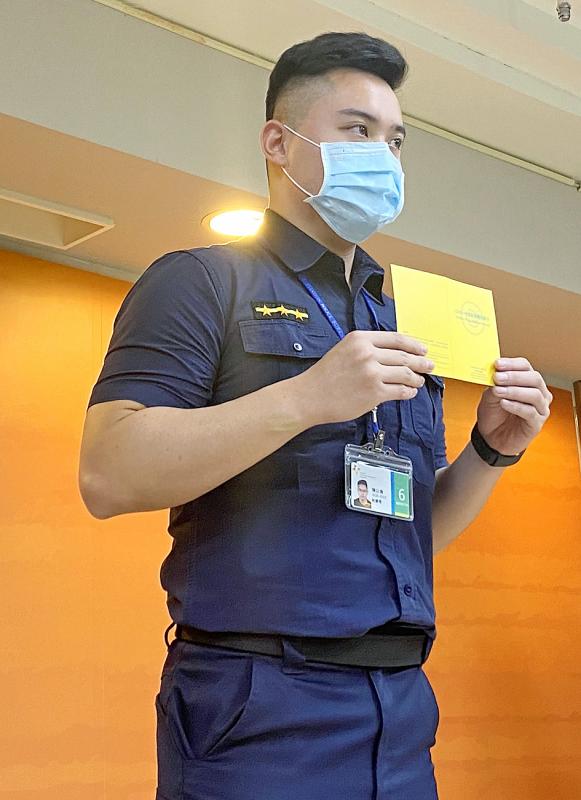 Chen earlier this month passed the exam to enter the university’s graduate program for public security, but has yet to enroll, the bureau said.

After passing, he wrote a statement about his study experience for the correspondence school to post online, it said.

The content only speaks to Chen’s personal experience and is inconsistent with the hard work undertaken by the many officers who stop firearms, drugs and diseases at the border, the bureau said.

Chen was also reportedly among the first cohort of aviation police to receive a COVID-19 vaccine.

The note generated anger among his fellow officers, who called the description unrealistic.

Before the COVID-19 pandemic halted international travel, officers said they would inspect about 40,000 travelers every day on average.

Sometimes they would be too busy to even use the toilet, they added.

Yet there are also some officers who goof around and do not take the job seriously, they said.

Slacking off is one thing, but flaunting it when others are working hard is unbearable, they added.

Since Chen’s statement has affected the bureau’s reputation, he has been issued a minor demerit and transferred, bureau Chief Inspector Huang Hui-sheng (黃惠生) said.

The bureau said that it calls on all of its officers to secure the nation’s borders to the best of their ability, whether they are responsible for inspections, security or detecting illicit contraband.

It vowed to improve education among its officers to ensure that personal actions do not interfere with the execution of official duties.