The Taipei Zoo recently had a scare when Tuan Tuan (團團), patriarch of the zoo’s giant panda family, began sneezing and had nose bleeds, although he soon recovered after treatment.

When staff noticed the symptoms on Dec. 8 last year, it was feared that Tuan Tuan might have a serious infection or illness, and a veterinary specialist was called to examine him, the zoo said on Friday.

The veterinarian could not see far into Tuan Tuan’s nasal passages using a rhinoscope, as the panda has a sensitive nose, the zoo said, adding that nothing was found, but oral medication was given to alleviate Tuan Tuan’s symptoms. 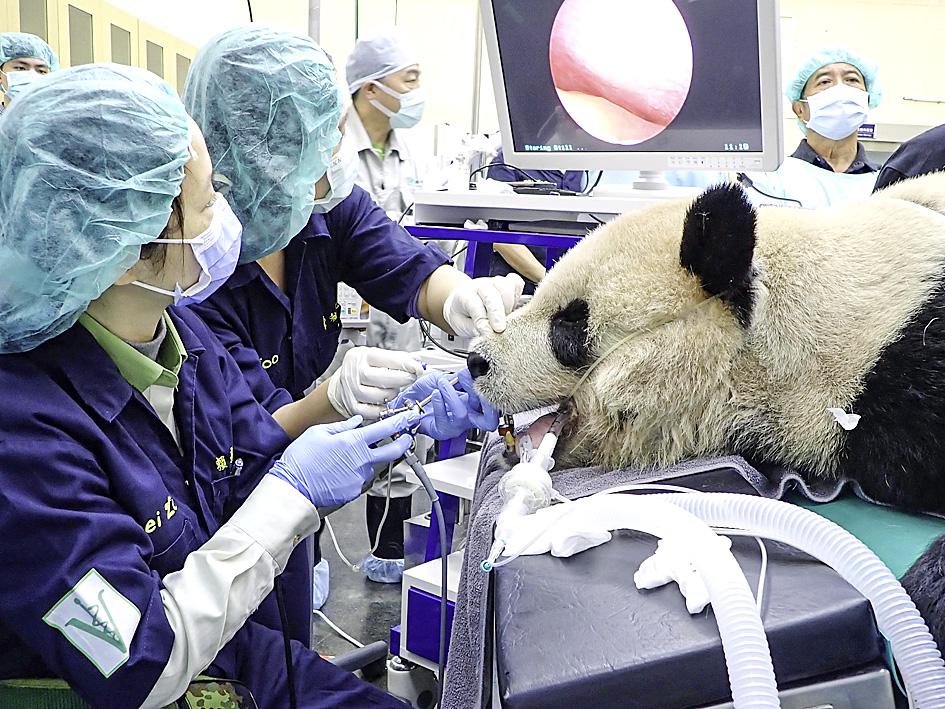 Photo courtesy of the Taipei Zoo

Zookeepers continued to monitor Tuan Tuan’s condition, as staff in the zoo’s giant panda section recalled finding leeches among the bamboo leaves that the pandas feed on, and thought the parasites might be responsible for Tuan Tuan’s symptoms, it said.

Staff inspected the panda family’s enclosure to check for leeches using a flashlight, but found nothing, the zoo said.

On Jan. 17, a veterinary team conducted a thorough medical examination of Tuan Tuan, which required a general anesthetic, it said.

Photo courtesy of the Taipei Zoo

They performed a nasal endoscopy of the entire nasal passage and took samples, the zoo said, adding that the mucous membrane on the right of the panda’s nasal cavity was inflamed.

Tuan Tuan was diagnosed with allergic rhinitus, and it was concluded that the sneezing had burst a capillary, resulting in the nose bleeds, it said.

The team also performed a general check-up, which included measuring the panda’s blood pressure, taking a blood sample, taking an X-ray and giving the panda and abdominal ultrasound examination, the zoo said, adding that Tuan Tuan is in good health.