ENDING CORRUPTION:
Newly sworn-in President Pedro Castillo is Peru’s first president in decades with no ties to the political or economic elite, and he has promised reform

Leftist Pedro Castillo was sworn in as Peru’s fifth president in three years on Wednesday, the 200th anniversary of the country’s independence, as he promised an end to corruption and a new constitution.

The 51-year-old rural schoolteacher, who has vowed to upend a quarter-century of neo-liberal government, enters the job with a lengthy to-do list: tame the COVID-19 outbreak, jump-start the economy and end political turmoil.

“I swear by the people of Peru for a country without corruption and for a new constitution,” he declared before the Peruvian Congress, coming back to a campaign promise to change a founding law friendly to free-market economics. 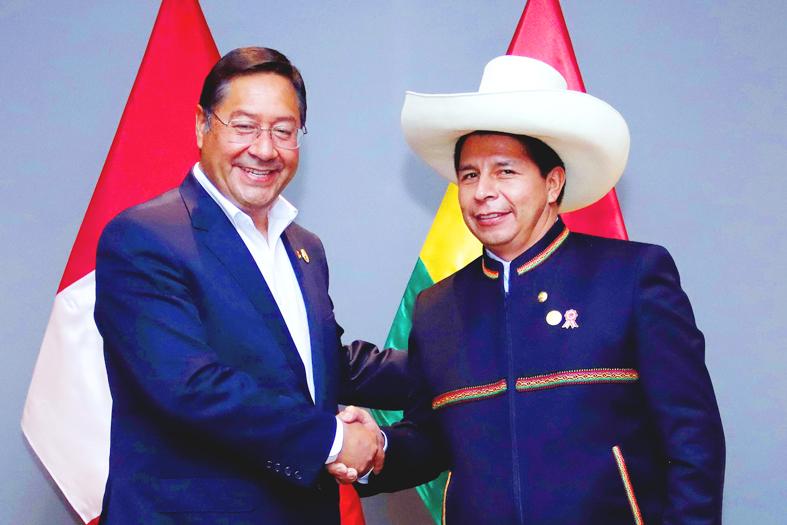 The existing charter is a relic of former Peruvian president Alberto Fujimori, who is serving jail time for corruption and crimes against humanity, and is the father of Castillo’s main presidential rival, right-wing populist Keiko Fujimori.

Insisting that Peru could not “remain a prisoner” of the 1993 constitution, Castillo said that he would send a bill to the congress with a view to organizing a referendum on replacing it.

Castillo’s Free Peru party does not enjoy a majority in the congress, but holds only 37 of the 130 seats.

He was declared the election victor on Monday last week, more than six weeks after a run-off race against Fujimori, whose allegations of voter fraud then had to be reviewed by an electoral jury.

About 10,000 police officers were deployed in the capital, Lima, and Castillo voters came out waving banners in a show of support.

“This is the first time this country will be governed by a peasant,” Castillo told guests, sporting his trademark, traditional white sombrero and a typical black Andean suit.

He also sought to calm fears among investors, the business community and backers of Fujimori, who had sought to portray him as a communist who would turn Peru into a new Venezuela or North Korea.

“During the election campaign, it was said that we are going to expropriate [assets]. It is totally false. We want the economy to have order,” the new president said.

However, he said that he would be looking for a “new deal with private investors.”

Castillo is Peru’s first president in decades with no ties to the country’s political or economic elite.

He has promised reform to ensure there are “no more poor people in a rich country,” but has softened his initial campaign talk of nationalization.

An extended pandemic lockdown last year is blamed for the loss of millions of jobs and dumping the country into recession — its GDP fell more than 11 percent.