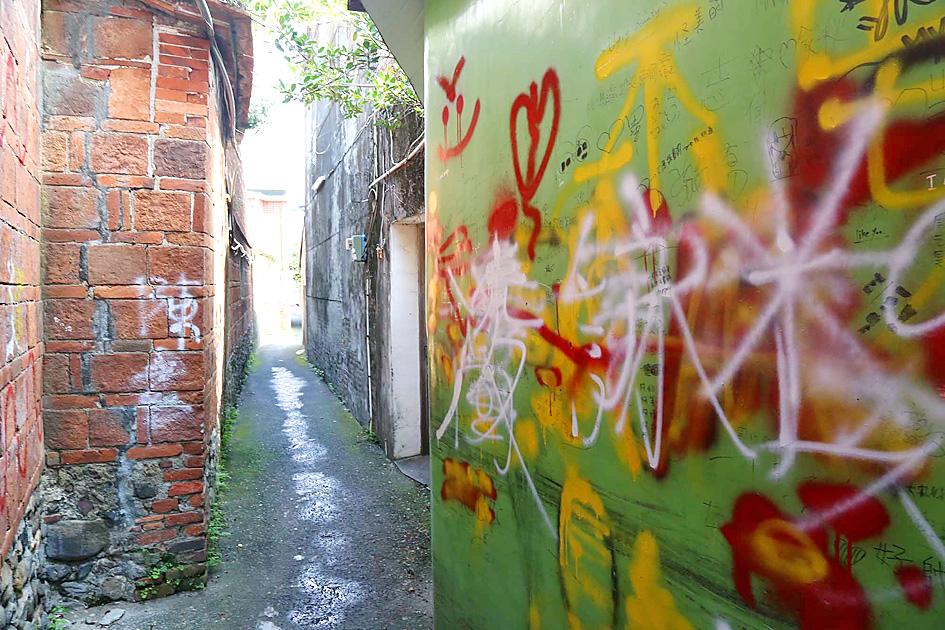 The bricks on the walls of Moru Lane, also known as “the breast touching lane,” belong to a house with a history of more than 100 years.

Its owner, Chou Chien-sheng (周建昇), said that he found paint and graffiti on the walls when he was checking the house, as he wanted to file for a request to list it as an official historical site.

The lane, which is only about 1.2m wide, makes it difficult for a woman to pass a man without her breasts brushing against him, hence the comical name, local residents said.

Some call it “the time tunnel” for the vintage atmosphere, or “lovers’ lane,” as couples enjoy visiting it for its narrowness and privacy.

Graffiti and paint were found on the walls on both sides of the lane, completely ruining its original aesthetics, Chou said.

Street graffiti can be beautiful and artistic, but it should only be applied where the law permits, he said.

Although open to the public, the lane is actually private property, so it should not be treated as a public message board where passersby write whatever they want, he said, citing Chinese writing on the wall, such as “Chao Jhou Junior High School spoiled brat” (潮州屁孩), as an example.

Such vandalism shows that schools have done a terrible job at teaching students right from wrong, he added.

The century-old red bricks in the walls have long been out of production, and repairs would be made by repainting the walls after cleaning the graffiti, Chou said, adding that the process takes a considerable amount of time and money.

Chou said that he would not rule out the possibility of reporting the incident to police and installing security cameras to deter people from engaging in similar illegal activities.

The Chaojhou Township Office urged locals to help protect the image of the township by showing respect for the lane’s status as private property.