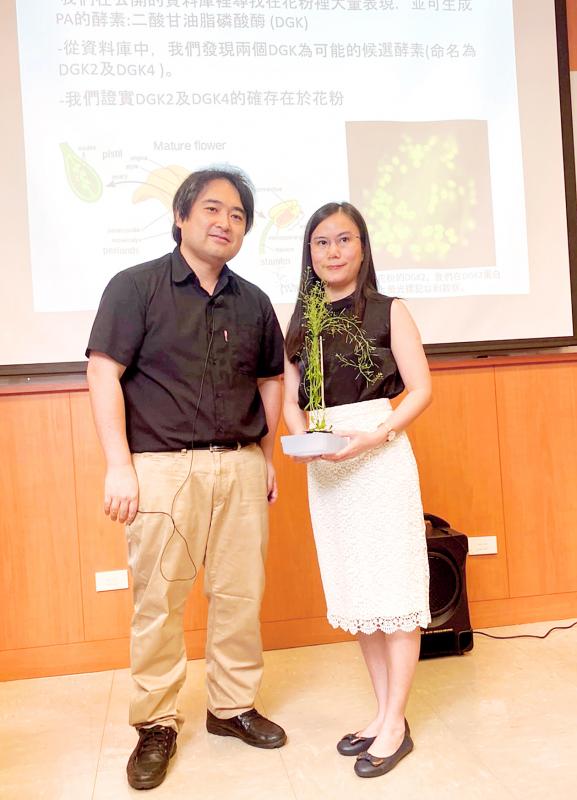 A paper published by an associate research fellow at the Institute of Plant and Microbial Biology could help increase the fertility of agricultural crops, Academia Sinica said on Tuesday last week.

Yuki Nakamura’s paper was published in the May 29 issue of The Plant Cell journal.

Nakamura’s team has discovered the key to pollen tube elongation, which would enable researchers to understand how lipid signaling makes pollen fertile and how to improve agricultural plant fertility.

Studies had shown that phosphatidic acid (PA) has a role in pollen tube growth, but its production and effect had remained unknown, Academia Sinica officials told a news conference in Taipei.

The team identified a pair of kinases, DGK2 and DGK4, in the pollen of thale cress, and demonstrated that the removal of the kinases reduced PA production and caused deformed pollen tube growth, resulting in plant infertility, they said.

Adding PA and relevant genes to infertile plants caused the DKG kinases to develop and pollen tubes to grow to their original length within 12 hours, meaning that PA signals produced by the DKG kinases are essential for plant fertility, they said.

The DGK2 and DGK4 kinases are found in key crop species such as rice, wheat, corn, tomatoes and apples, but the PA mechanism is also likely to exist in other plant species, the paper said.