‘BEST MEDICINE’:
The Nuggets pulled out just their third win in 10 games to add to the Knicks’ three-game losing streak in front of a surly home crowd at Madison Square Garden

Nikola Jokic on Saturday scored 32 points and made 11 rebounds in just 27 minutes to lead the Denver Nuggets over the New York Knicks 113-99.

Denver never trailed in winning for only the third time in 10 games. 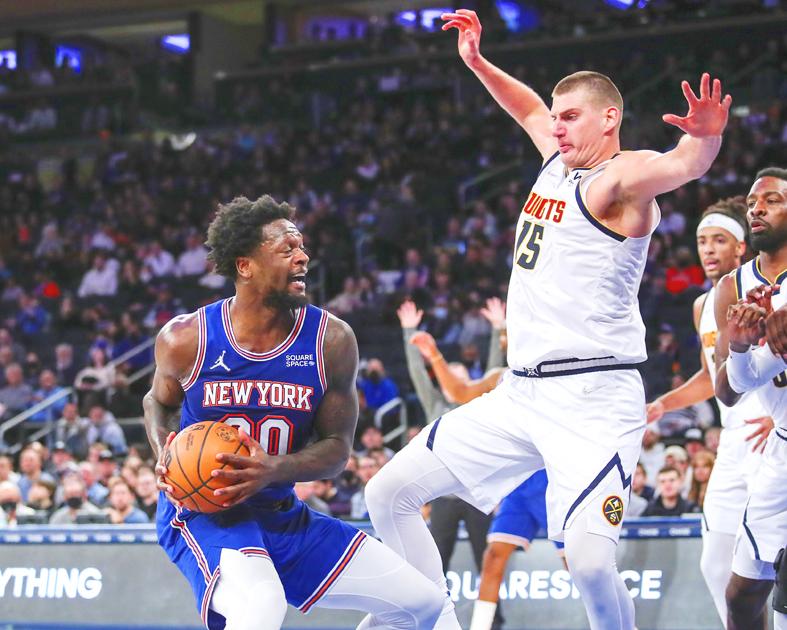 Zeke Nnaji added 21 points off the bench for the Nuggets, Will Barton contributed 13 and Jeff Green 11.

“I like something here,” NBA reigning Most Valuable Player Jokic said of the historic Manhattan arena — where he exchanged courtside comments with famous Knicks fan Spike Lee. “I don’t know what it is.”

The Knicks have lost three straight overall and fell to 5-8 at Madison Square Garden this season.

“We [have to] look ourselves in the mirror and decide what we want the season to be,” Julius Randle said after leading the Knicks with 24 points on 9-for-18 shooting. “We have to commit to it.”

Evan Fournier chipped in 15, R.J. Barrett added 13 and Alec Burks and Derrick Rose each had 11 for New York.

“I say it all year [and] I’ll continue to say it: We’re going to win games with our defense,” Randle added. “That’s who we are.”

The Nuggets led 30-24 after the first quarter and were up 60-49 at halftime. During the second quarter, the Nuggets led by as many as 16, which caused the home crowd to grow surly.

After New York cut their deficit to six in the third period, Green and Jokic responded with layups on consecutive possessions to push the advantage to 73-63. The layups sparked 23-8 run, including 12 points by Jokic, as Denver made it 92-71.

“There were a lot of looks on threes just because of how much they were helping inside,” Nnaji said.

When Knicks coach Tom Thibodeau met with reporters nearly 90 minutes before the game, he had one player on his mind: Jokic. Specifically, his skill set and how to defend against it.

“He’s so unique because you can run your offense through him,” Thibodeau said. “When a guy passes the ball the way he does, he makes everyone a lot better.”

In San Francisco, Derrick White scored 25 points while Dejounte Murray had 22 points and 12 rebounds as the San Antonio Spurs closed the fourth quarter with an 8-1 run to beat the Golden State Warriors 112-107.

Elsewhere, DeMar DeRozan scored 13 of his 29 points in the fourth quarter and Zach LaVine scored a team-high 31 as the Chicago Bulls defeated the Brooklyn Nets 111-107 in New York.

In other games, it was: