Gay drilled a 30-yard field goal as time ran out to give the Rams a thrilling 30-27 win after Brady and the Bucs had recovered from 27-3 down to tie the game at 27-27 just moments earlier.

The win means the Rams advance to an National Football Conference Championship game at home to the San Francisco 49ers where a place in the Super Bowl will be at stake. 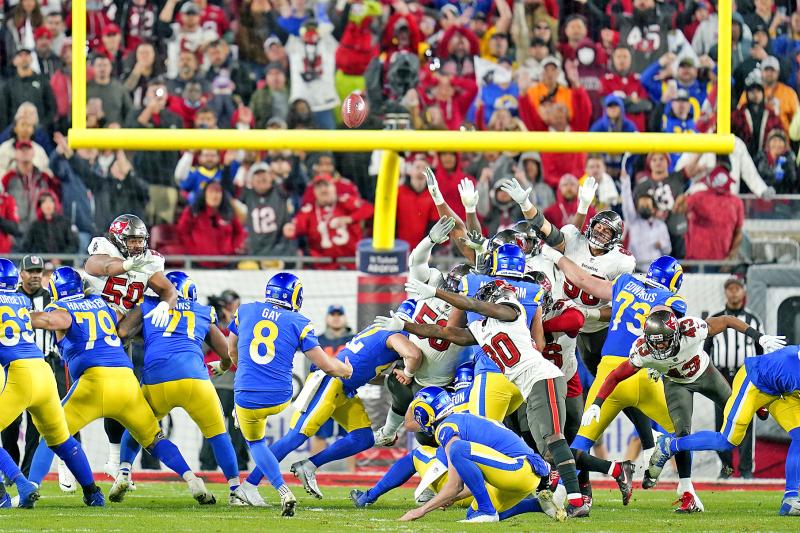 In Sunday’s other playoff, Patrick Mahomes led the Kansas City Chiefs to an epic 42-36 overtime victory over the Buffalo Bills in a classic shoot-out at Arrowhead Stadium.

Bills quarterback Josh Allen looked to have given Buffalo victory after finding Gabriel Davis in the end zone to make it 36-33 with 13 seconds remaining, but Mahomes marched the Chiefs back into field-goal range to send it to overtime, before hitting Travis Kelce on the first drive to settle a remarkable encounter.

The Chiefs advance to an American Football Conference Championship game with the Cincinnati Bengals.

“We let them back into the game with a bunch of mistakes on offense, but we’re a tough team, this is what we’re all about,” said Rams quarterback Matthew Stafford, who finished with 366 passing yards from 28 of 38 attempts.

Brady, who was sacked three times and hit on six other occasions by the Rams defense, threw for 329 yards with one touchdown.

“We were down a bunch and a lot of guys made a bunch of different plays to get us back into it. They just made one more than us,” Brady said.

The drama in Tampa was matched by an epic duel in Kansas City between Mahomes and Buffalo’s counterpart Allen.

An incredible game saw both teams combine for 25 points in the final two minutes of regulation as the lead changed hands three times.

Mahomes threw for 378 yards and three touchdowns, while rushing for another as the Chiefs stayed on course for a third straight Super Bowl appearance, but the loss was cruel on Allen, who finished with four touchdowns and 329 passing yards.

Harrison Butker’s 49-yard field goal sent the game to overtime and the Chiefs snatched a sudden death win when Mahomes found Kelce in the back of the end zone.

“It was a great game between two great football teams,” Mahomes said. “Josh [Allen] played his ass off, pardon my language.”