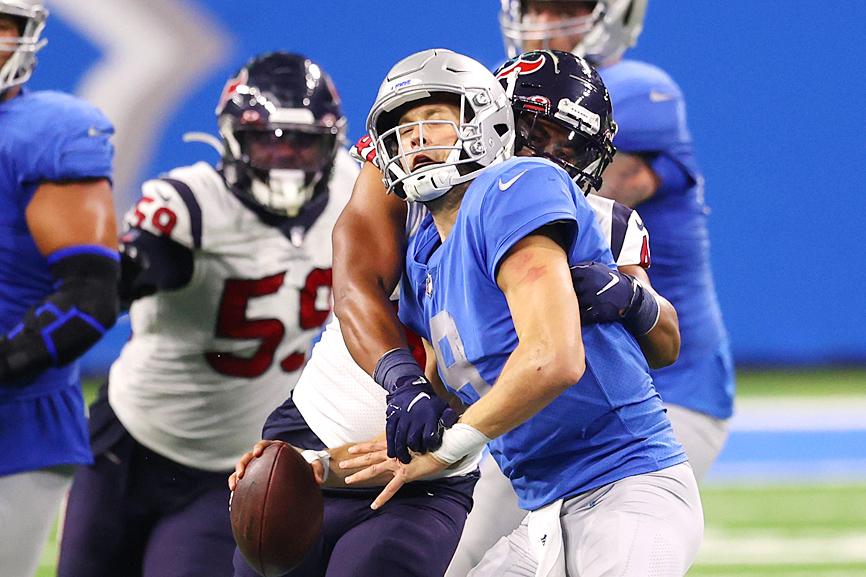 DeShaun Watson on Thursday threw for four touchdowns and 318 yards as the red-hot Houston Texans kept their playoff hopes alive with a 41-25 victory over the Detroit Lions.

Will Fuller finished with two touchdown catches and a total of 171 yards, while defensive end J.J. Watt returned an interception for a touchdown for the Texans, who have won three of their past four games.

“We wanted to show we can have an explosive offense and defense,” Watson said. “It was fun. We are ready to get home to have some celebrations. We plan on feeding off this. We got Indy next week and we are ready to go.”

The game was one of two played on Thanksgiving. In the other matchup, Antonio Gibson ran for three touchdowns as Washington moved into first place in the hapless National Football Conference East Division with a 41-16 win over the Dallas Cowboys at AT&T Stadium.

The NFL’s showcase day was marred by the postponement until tomorrow of the marquee evening contest between the undefeated Pittsburgh Steelers and Baltimore after several Ravens’ players were diagnosed with COVID-19, resulting in an angry response from the Steelers.

The Ravens’ outbreak now means that seven players are on the COVID-19 injury list, which indicates a player has tested positive or is considered a “high-risk” close contact of an infected person.

The addition of defensive end Jihad Ward to the list on Thursday means that tomorrow’s rescheduled game is also in jeopardy.

Houston’s Tyrell Adams racked up a season-high 17 tackles, while Duke Johnson rushed for 80 yards and also scored a touchdown in the victory at Ford Field.

Detroit’s Matthew Stafford passed for 295 yards and one touchdown, while Adrian Peterson gained 55 yards on 15 carries and scored twice for the Lions, who dropped to 4-7 for the season.

Lions coach Matt Patricia was bombarded with questions from reporters about his job security.

“My focus every day is on the guys in that locker room and working as hard as I can to help them be successful,” Patricia said.

Tampa Bay faced one of the NFL’s stingiest defenses in their previous outing, but the Buccaneers will shift gears in week 12 and face one of the league’s most explosive offenses.

Tomorrow’s marquee quarterback matchup of Patrick Mahomes of the Chiefs and Tom Brady of the Bucs could result in plenty of fireworks.

Mahomes is coming off a 35-31 win over the Las Vegas Raiders, while Brady had an uncharacteristically subpar performance in his last outing, a 27-24 loss to the Los Angeles Rams.

“We’ve built chemistry with bringing the same guys back year-in and year-out, so we know where each other is on that football field,” Mahomes said.

Mahomes leads the offense, along with one of his favorite targets: Travis Kelce, who ranks third among receivers with 896 yards.

Despite some of his recent struggles, Brady is still an iconic quarterback capable of explosive plays. He has gone zero-for-nine in his past four games on passing attempts of more than 20 yards, but he is not the type of quarterback to stay in a funk very long.

“We’ve got guys open, we’ve just missed them,” Tampa Bay coach Bruce Arians said. “And there are times when coverage dictates you go to that guy. I think we can do a better job of utilizing the deep ball in our game plan.”