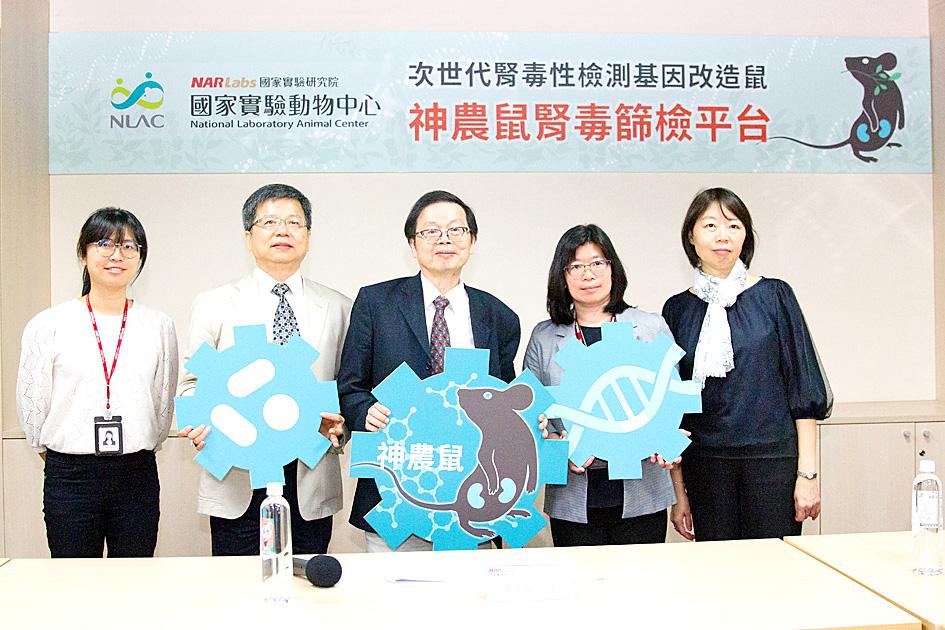 The National Laboratory Animal Center yesterday unveiled a transgenic mouse species for early detection of drug-induced toxicity in the kidneys in a bid to help drugmakers reduce the toxicity of medicines at early stages of development.

While drugs are required to pass safety tests before entering the market, about 2 to 3 percent of newly approved drugs are recalled annually due to toxicity that is not detected previously, National Cheng Kung University (NCKU) Hospital nephrologist Chiou Yuan-yow (邱元佑) told a news conference in Taipei.

While high concentrations of metabolic waste products, such as creatinine and blood urea nitrogen, suggest the existence kidney disease, their concentrations can be stabilized with only 50 percent of the normal kidney function, meaning the substances are not reliable indicators of earlier kidney problems, said Chiou, also a researcher at the center.

Urine protein is another indicator of kidney disease, but its concentration is likely affected by other dietary factors, he added.

While some international pharmaceutical firms had worked with the US, the EU and Japan to develop a method of using seven urine proteins to detect nephrotoxicity, each protein requires a testing reagent, and the method cannot entirely rule out nephrotoxicity, he said.

In an effort to create a more efficient tool to test nephrotoxicity, Chiou worked with researchers at the center and the university to develop a transgenic mouse species.

He first identified a biomarker named myo-inositol oxygenase (MIOX), an enzyme that is specific to the kidney and released from cells into serum and urine within 24 hours of kidney damage, he said.

As MIOX is not easily detected, the team utilized the center’s genetic modification techniques to add a luminescent enzyme called nanoluciferase (NanoLu) to the mice’s genes and enlarge its expressions, he said.

When a subject’s kidney was damaged, the nanoluciferase would be released into cells and enter serum or urine, allowing researchers to more clearly observe kidney damage, he said.

Over the past two years, the team has experimented with more than 100 mice to develop the transgenic species, Chiou said, adding that the new species is called MIOX-NanoLu transgenic mouse.

Pharmaceutical firms and researchers can use the mice as testing platforms to prevent their products from damaging the kidneys, he said.

The team published their findings in the journal Scientific Reports in August.

Ideally, the transgenic mice would act like the Taoist deity Shennong (神農, God of Herbs), who knows the toxicity of herbs by tasting them, center Director-General Genie Chin (秦咸靜) said.

The mice’s genetic material have been preserved at the center’s freezers, and it can breed the mice upon request, she said.

The animal center is one of the National Applied Research Laboratories’ eight centers.