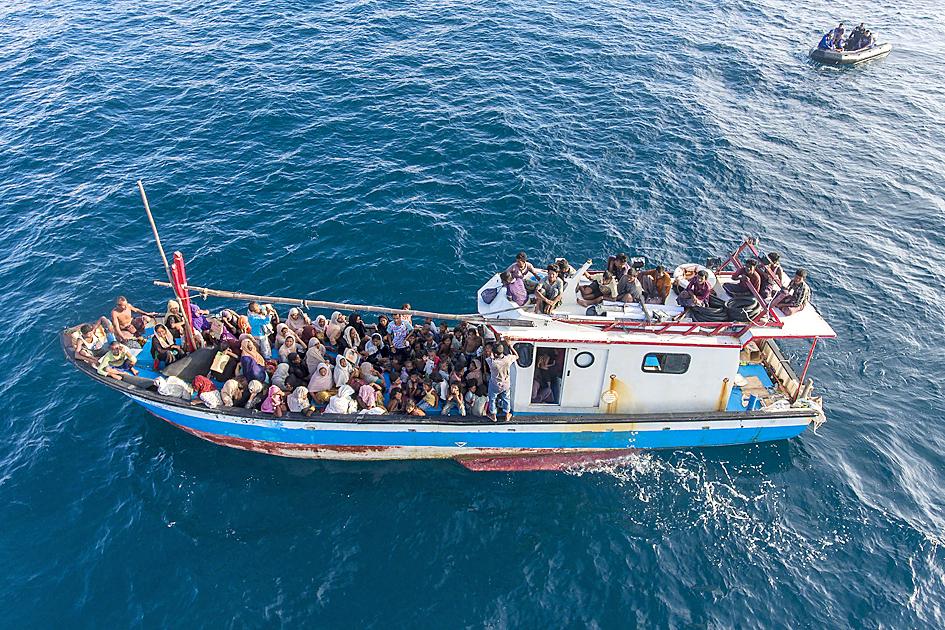 A group of Rohingya have said they were beaten by traffickers and drank their own urine to stay alive on a perilous four-month journey at sea until their dramatic rescue near the Indonesian coast.

The bedraggled survivors — about 100 in all, mostly women and children — described a high-seas horror story that saw them reduced to throwing the dead overboard as their rickety craft drifted thousands of kilometers toward Malaysia.

Two survivors claimed that people-smugglers paid to transport them had beaten the Rohingya, who were later moved to a new boat and abandoned at sea.

They were rescued by fishers in Indonesia on Wednesday and pulled to shore by locals the next day, thousands of kilometers south of Bangladesh.

“We suffered so much on that boat,” 50-year-old Rashid Ahmad told reporters at an immigration detention center in Lhokseumawe on Sumatra’s northern coast.

“They tortured us and cut us. One of us even died… There was food at first, but when it was done they [the traffickers] took us onto another boat and then let us float away alone,” he added.

Another survivor, Habibullah, said: “They beat everyone badly. My ear was cut and I was beaten on the head.”

Agence France-Presse could not independently verify the accounts of four members of the Muslim minority group, who said they set off earlier this year near a Rohingya refugee camp in Bangladesh, next to their native Myanmar.

Survivor Ziabur Rahman bin Safirullah, 35, said the group got by on small rations of rice and nuts while relying heavily on rainwater to survive.

“Sometimes we squashed wet clothes and drank the water from them,” he said, adding that those who died were thrown into the sea.

Korima Bibi said at least two people died during the voyage and that some on board resorted to drinking urine to stay alive, as others got sick from the rough seas.

Among the about 100 in the group were 48 women and 35 children. They set off from the Balukhali refugee camp in southern Bangladesh, but were originally from Myanmar’s conflict-torn Rakhine State, according to survivors and an account given to the International Organization for Migration (IOM).

A spokesperson for the group told the IOM that one woman had died on the way, leaving behind her two children.

Another three children, two of them siblings, and a 10-year-old girl were unaccompanied. The group also included a pregnant woman, according to the IOM.

The smugglers were charging each person about US$2,300 to get them to Malaysia, the IOM said.

Thousands try a perilous escape via smugglers across the sea each year.

About 1,400 Rohingya have been stranded at sea this year — and at least 130 of those have died, according to IOM figures.

Last week, a Malaysian coast guard official said dozens of Rohingya were believed to have died during a months-long journey to that country.

There had originally been more than 300 people on board the boat that was intercepted by authorities this month, with the 269 survivors given temporary shelter.

Indonesia has previously allowed Rohingya to land and many to stay.

However, wary officials have turned them away in the past few months, worried that they could be carrying the COVID-19.

That concern played out in dramatic fashion on a beach in Lhokseumawe on Thursday, when the Rohingya survivors were pulled to shore by locals furious at the refusal of authorities to give them shelter over coronavirus fears.