More late-night magic has the Atlanta Braves just two wins away from the World Series.

Eddie Rosario on Sunday delivered Atlanta’s second straight walk-off hit in the ninth inning, giving the Braves a 5-4 victory over the Los Angeles Dodgers and a commanding 2-0 lead in the National League Championship Series.

Rosario’s fourth hit of the game was a two-out single off shortstop Corey Seager’s glove after the Braves twice rallied from two-run deficits. 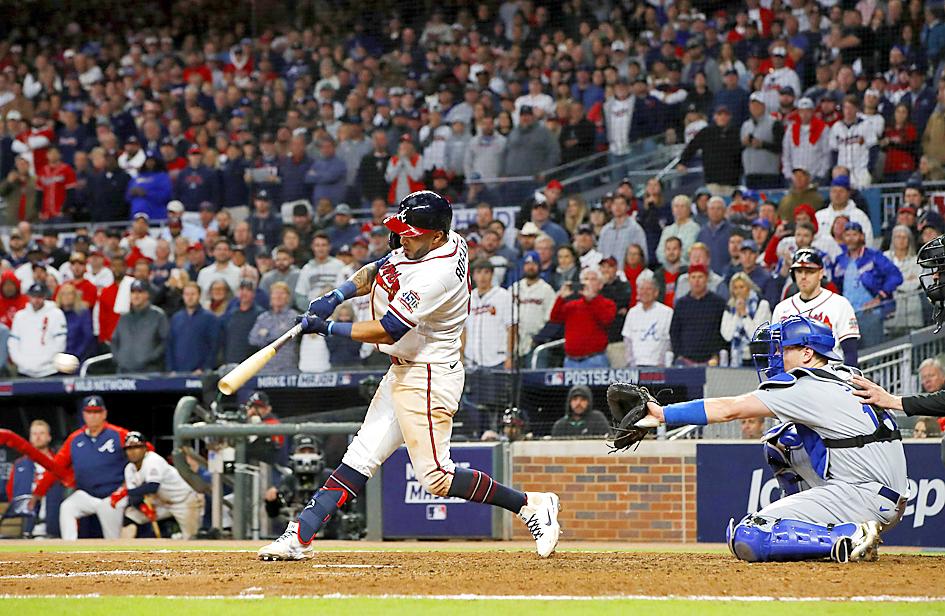 “These guys have always been like that,” Atlanta manager Brian Snitker said. “They’re never out.”

Rosario delivered a 169kph scorcher up the middle on the first pitch after closer Kenley Jansen relieved. Seager tried for a backhand snag, but the ball skidded off his glove into center field.

There was no chance to get Dansby Swanson, who raced around from second with the winning run, dropping his helmet as he crossed the plate — a virtual repeat of Game 1 when Austin Riley came through with a winning hit in the ninth for a 3-2 victory.

The series resumes in Los Angeles, where Game 3 in the best-of-seven series is scheduled for today.

“We all have that dream, that desire to get to the World Series,” Rosario said. “That’s just what we’re going for.”

The Braves are halfway to their first World Series appearance since 1999, but they cannot celebrate just yet.

A year ago, Atlanta held leads of 2-0 and 3-1 over the Dodgers in the championship series, only to lose the last three games of a series played in Arlington, Texas, because of the COVID-19 pandemic.

Los Angeles went on to beat Tampa Bay in the World Series, while the Braves stewed for another shot.

They rallied in the eighth off Julio Urias, who pitched three hitless innings to finish Game 7 against the Braves in October last year.

Seventy-three of 87 teams taking 2-0 leads in best-of-seven post-season series have gone on to win.

“We were up on them 2-0 last year, so it’s like one of those things where you can’t stop now, you got to continue to apply the pressure, and come out every day and get after it,” Riley said.

Seager and Atlanta’s Joc Pederson traded two-run homers — Pederson adding to his “Joctober” lore with his third homer of this post-season and the first off his longtime team — before Chris Taylor put the Dodgers ahead again with a two-run, bases-loaded hit in the seventh.

However, it was another night of wasted chances for Los Angeles, who went one of 10 with runners in scoring position and dropped to two of 18 in the series.

Six outs from tying the series, the Dodgers brought in expected Game 4 starter Urias to protect the lead before turning it over to Brusdar Graterol in the ninth.

Rosario led off with a single and tagged up to move up to second on Freddie Freeman’s flyout.

Ozzie Albies lined to right for another hit off Urias. Rosario zipped around third as third base coach Ron Washington sent him home, just beating the throw with a brilliant slide that avoided catcher Will Smith’s swipe.

Then it was Riley coming through again. He ripped a double to right center, bringing Albies all the way around from first with the tying run as Washington made another aggressive send.

Dodgers manager Dave Roberts had no regrets about turning to Urias.

“He was the best option at that point in time,” Roberts said.

Travis d’Arnaud led off the ninth with a broken-bat single to center on a 163kph pitch from Graterol and was replaced by pinch-runner Cristian Pache. Swanson tried to move Pache along with a bunt, only to have the attempted sacrifice result in a force-out at second when Seager made a backhand stop on Graterol’s bounced, offline throw.

Swanson managed to get to second himself when Guillermo Heredia grounded out to third base.

The Dodgers turned to their closer to face Rosario, who connected on the very first pitch for the fifth walk-off in 23 post-season games this year.

Braves closer Will Smith picked up the win with a 1-2-3 ninth, breathing a big sigh of relief when Trea Turner’s drive was caught at the base of the wall in left.