RED LINE:
The US and its allies would not accept if ‘any’ Russian troops cross into Ukraine, the state secretary said, clarifying Biden’s remarks about a ‘minor incursion’

The US and its allies on Thursday warned Moscow of grave consequences if “any” of the tens of thousands of troops massed on the border were to cross into Ukraine.

Allowing Russia to breach Ukraine’s territorial integrity would “drag us all back to a much more dangerous and unstable time, when this continent, and this city, were divided in two … with the threat of all-out war hanging over everyone’s heads,” he told reporters. 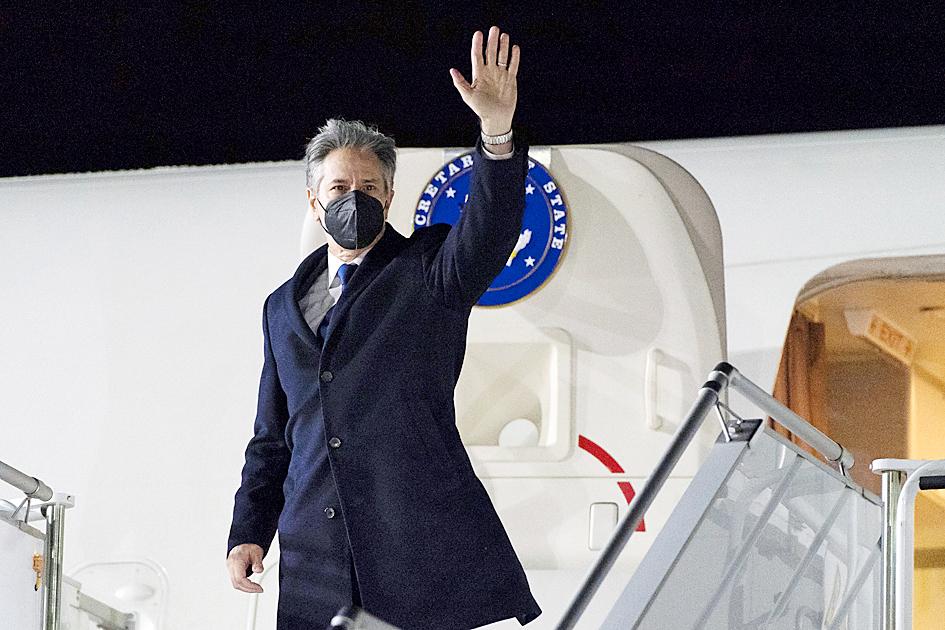 In a show of that unity, German Minister of Foreign Affairs Annalena Baerbock, speaking alongside Blinken, said that the West would not shy away from taking action even if that included measures that “could have economic consequences for ourselves.”

Fears are mounting that a major conflict could break out in Europe, and British Prime Minister Boris Johnson cautioned that Russia marching on Ukraine would have repercussions beyond the continent.

“It would be a disaster for the world,” he said.

To defuse the worst tensions between Russia and the West in decades, Blinken is on a whirlwind diplomatic tour that took him to Berlin on Thursday before his meeting with Russiam Minister of Foreign Affairs Sergei Lavrov in Geneva yesterday.

Moscow insists that it has no plans to invade, but has at the same time laid down a series of demands — including a ban on Ukraine joining NATO — in exchange for de-escalation.

Washington has rejected Moscow’s demands as “non-starters” and NATO Secretary-General Jens Stoltenberg this week said that the alliance “will not compromise on core principles such as the right for each nation to choose its own path.”

Upping the ante, Russia announced new naval drills that would include deployments of “more than 140 warships and support vessels, more than 60 aircraft, 1,000 pieces of military equipment, and about 10,000 servicemen” to the Atlantic, Pacific, Arctic and Mediterranean oceans.

The announcement followed an angry condemnation from the Kremlin of what it described as “destabilizing” remarks from US President Joe Biden, after he vowed a “severe” response to any invasion of Ukraine.

A US official said that the exercises could presage a permanent Russian military presence involving both conventional and nuclear forces in Belarus.

The West has repeatedly warned Russia it would pay a “high price” of economic and political sanctions should it invade Ukraine.

Hours before Blinken arrived in Berlin to coordinate the possible response to Russia, Biden sparked controversy as he appeared to indicate that a “minor incursion” might prompt a smaller reaction from NATO allies.

“It’s one thing if it’s a minor incursion, and then we end up having a fight about what to do and not do, et cetera,” he said.

Blinken in Berlin clarified the comments, saying that “if any Russian military forces move across the Ukrainian border and commit new acts of aggression against Ukraine, that would be met with a swift, severe response from the United States and our allies and partners.”