The 19-year-old Pole was in ruthless form as she downed Bencic 6-2, 6-2 to claim the second title of her career.

Swiatek burst onto the tennis scene at Roland Garros last year when she claimed the French Open crown, defeating then world No. 6 Sofia Kenin in the final. 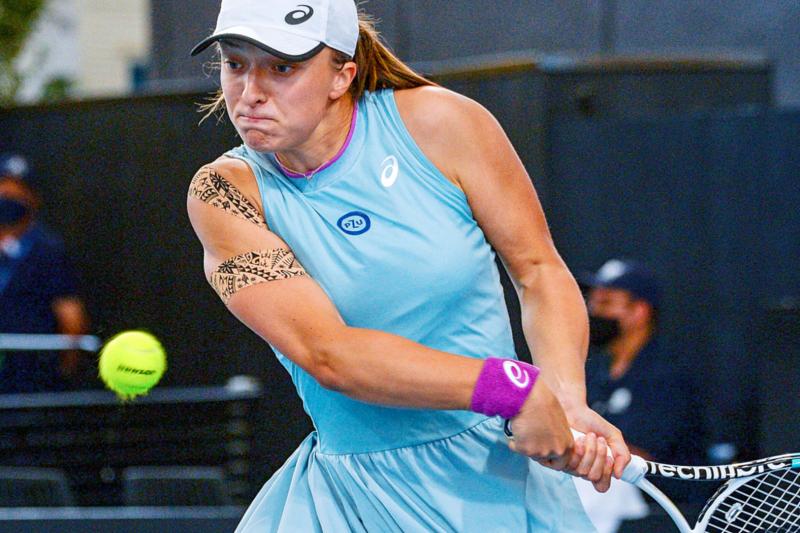 She started strongly against Bencic and never eased up, breaking her Swiss opponent twice in each set to wrap up a comfortable win.

Both players were untroubled, holding their opening service games until Bencic’s serve deserted her at 2-2 and Swiatek took full advantage.

She broke Bencic and was never in trouble after that, running away with the title on the back of a powerful forehand and Bencic’s misfiring serve, which included eight double faults.

Swiatek went into the tournament as world No. 18, but is now to rise to a career-high No. 15 as a result of the win, her first hard-court title.

She said that she appreciated being able to play in front of spectators during the Australian tournaments, particularly in front of a capacity crowd for the Adelaide final.

“It’s been an amazing time here in Australia,” she said.

Bencic, whose season was badly affected by injury problems, was playing her 11th final, but her first in 12 months.

The former world No. 4 showed some glimpses of her best tennis, but had no answers against Swiatek.

“Tennis can be a little bit brutal,” she said. “You can have a very good week, and still end up losing and having a bitter feeling. I didn’t manage to find a way today, but I think I had a great week and I really enjoyed playing here.”

Bautista Agut won 88 percent of the first-serve points and was ruthless on Humbert’s serve, converting all four break points. He served out the match and on his first match point.

The Spaniard, who is chasing a 10th career title and first since winning Doha in 2019, meets unheralded Peter Gojowczyk for a place in today’s final.

The German qualifier eased into the last four by beating Austrian Dennis Novak 6-4, 6-1.

Gojowczyk was strong on serve, winning 88 percent of his first-serve points and saving the only two break points he faced.

Rafael Nadal on Friday said that he would not play in the Acapulco ATP tournament next month because of a back injury, which also caused his withdrawal from next week’s Rotterdam event.

The world No. 2 is therefore unlikely to play again until the season’s first Masters event in Miami from March 24.

“It is a difficult year for everyone and in my current state of health, with a bad back, it is impossible to make such a long trip. I love Acapulco, I have played the last four years, but this year it is not possible. Hopefully in 2022,” he wrote.

Nadal was bothered by the back injury in Melbourne, where he was knocked out of the Australian Open in the quarter-finals by Stefanos Tsitsipas from two sets up.

The Spanish star could lose his No. 2 world ranking next week to Russia’s Daniil Medvedev if the Australian Open runner-up makes the final in Rotterdam.