Taiwan and the US have established a new bilateral cooperation framework to develop commercial programs and strengthen critical technology supply chains.

Called the Technology Trade and Investment Collaboration (TTIC), it is also to focus on promoting a two-way investment environment, studying industry trends, and exploring new opportunities and investment in the US market, a US Department of Commerce news release said.

The two sides are to designate representatives at the bureau level to plan and convene the first meeting of the TTIC in the coming months, the statement said, while providing few other details about the framework’s functions. 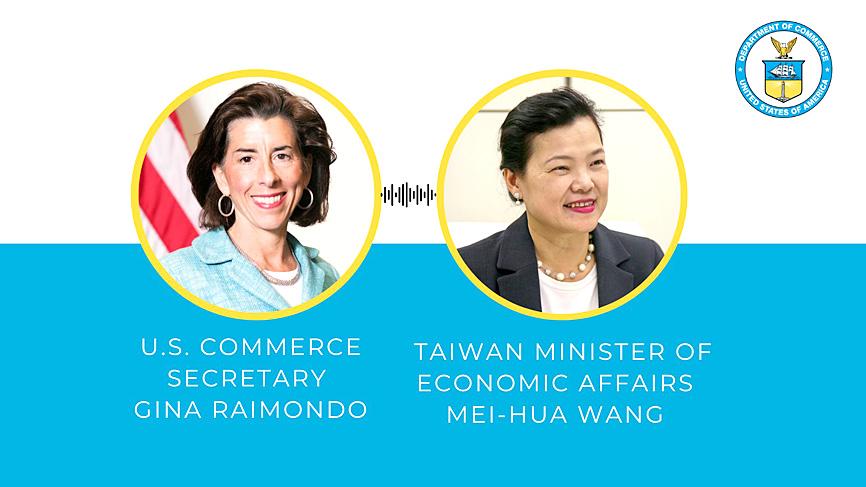 Taiwan and the US already communicate on economic issues through two other high-level bilateral economic dialogue platforms — the Trade and Investment Framework Agreement and the US-Taiwan Economic Prosperity Partnership Dialogue.

The forming of the mechanism was announced during an online meeting between Minister of Economic Affairs Wang Mei-hua (王美花) and US Secretary of Commerce Gina Raimondo early yesterday.

During the meeting, Raimondo reiterated Washington’s support for Taipei, and the importance of the bilateral US-Taiwan commercial and investment relationship.

She also expressed the US’ continued interest in working together with Taiwan on issues of common commercial concern, particularly in the area of semiconductor supply chains and related ecosystems, the statement said.

The US has repeatedly pressed Taiwan, as a major chip producer, to do more to help resolve a global shortage of semiconductors, which has shuttered some auto production lines and impacted consumer goods.

Taiwan says it is doing all it can to help.

Taiwan and the US are long-term and reliable supply chain partners, Wang said.

The new framework would help Taiwanese and US companies work closer to promote two-way investment and trade to further deepen the already strong relations between the two nations, Wang was quoted as saying in a statement.

Taiwan also hopes to further work with the US on infrastructure in third nations and in helping Taiwanese firms participate in US President Joe Biden’s “Build Back Better” plan, she said.