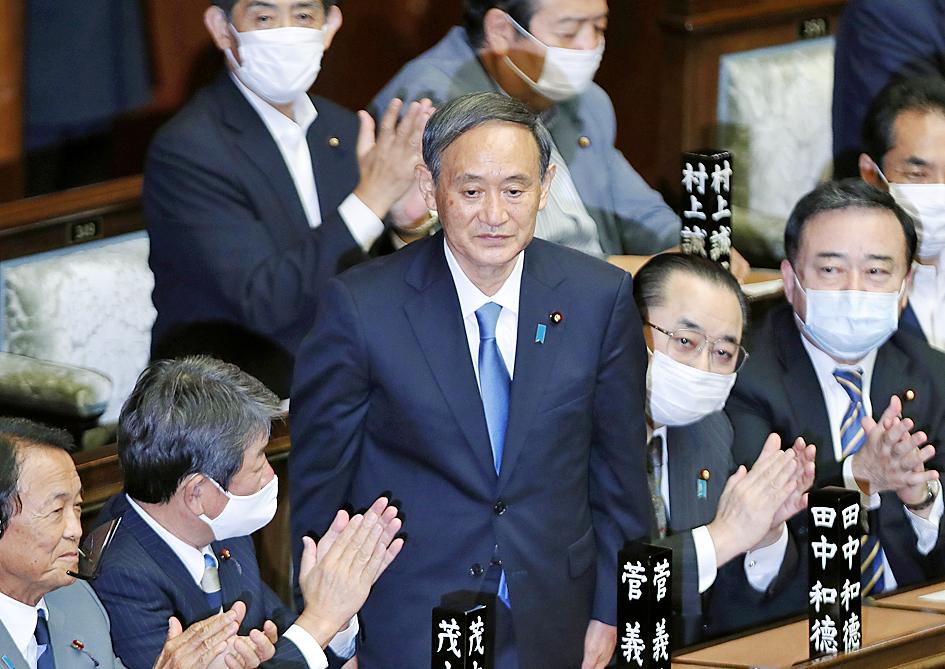 The Presidential Office yesterday congratulated Yoshihide Suga on his election as Japanese prime minister, saying that it hoped bilateral ties would continue to grow stronger during his tenure.

Suga, 71, won an easy victory in a parliamentary vote, where his ruling Liberal Democratic Party holds a commanding majority.

He bowed deeply as lawmakers applauded his win, but made no immediate comment.

Presidential Office spokesman Xavier Chang (張淳涵) said that Taiwan would seek to deepen its partnership with Japan for the benefit of the people of both nations, and to maintain regional peace, stability and prosperity.

Chang also conveyed President Tsai Ing-wen’s (蔡英文) thanks to Suga’s predecessor, Shinzo Abe, for his long-term support for Taiwan and her wishes for his speedy recovery.

Abe resigned on Aug. 29, saying that he was suffering a recurrence of the ulcerative colitis that forced him to cut short a first term in office and said that he no longer felt able to continue as prime minister.

The Ministry of Foreign Affairs also congratulated Suga and said it had instructed the Taipei Economic and Cultural Representative Office in Japan to relay to Suga the congratulations of Tsai, Minister of Foreign Affairs Joseph Wu (吳釗燮) and Taiwan-Japan Relations Association President Chiou I-jen (邱義仁).

The ministry said that Suga, during his tenure as chief Cabinet secretary, had helped Abe promote policies beneficial to Taiwan.

Taiwan and Japan are both important democracies in the Indo-Pacific region, and the nation would continue to deepen its partnerships with Japan in various areas in a bid to maintain peace, prosperity and stability, it said.

Suga’s Cabinet was announced shortly after the vote, with several ministers keeping their jobs, including Japanese Minister of Foreign Affairs Toshimitsu Motegi and Minister of Finance Taro Aso.

Abe’s brother, Nobuo Kishi, who was adopted by his uncle as a child and carries his surname, is the new minister of defense, replacing Taro Kono, who becomes minister for administrative reform.

Suga is seen as a continuity candidate and has said his run was inspired by a desire to pursue Abe’s policies, although analysts warned of challenges ahead.

“Tough issues are mounting before the Suga Cabinet,” said Shinichi Nishikawa, a professor of political science at Meiji University in Tokyo. “The coronavirus is the top priority to tackle. On the diplomatic front, there are many uncertain factors, including the US presidential election.”

Suga has spent decades in politics and has a reputation for pushing government policies through a sometimes intractable bureaucracy.

He has said that boosting the economy, which was already in recession before the COVID-19 pandemic, would be a top priority, along with containing the coronavirus — essential if the postponed Tokyo Olympic Games are to open as planned in July next year.

On foreign policy, where Suga is a relative novice, he is also likely to tread the path charted by Abe, prioritizing the key relationship with the US, regardless of who is president after November’s election.