‘GLOBAL BRITAIN’:
Boris Johnson hailed the pact as a prelude to further deals, as the UK is striving to join a massive Indo-Pacific free-trade accord

It follows similar UK trade deals with Japan and the EU following London’s divorce with Brussels. 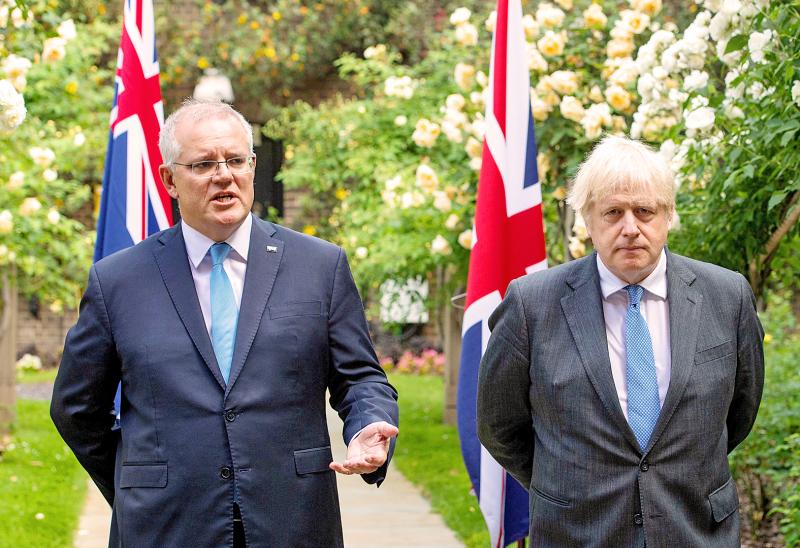 “This is global Britain at its best — looking outwards and striking deals that deepen our alliances and help ensure every part of the country builds back better from the pandemic,” he added in a statement.

“This is … a prelude to further deals,” Johnson told reporters.

Morrison praised the “foundational partnership” that would strengthen economic links and boost cooperation between the two nations.

British Secretary of State for Foreign, Commonwealth and Development Affairs Dominic Raab wrote on Twitter that the deal was “an important stepping stone” in efforts to join a massive free-trade zone in the Indo-Pacific region — the Comprehensive and Progressive Agreement for Trans-Pacific Partnership.

The deal eliminates tariffs on UK exports, with a final agreement in principle to be published in the coming days, the government said.

The UK-Australia trade relationship was worth ￡13.9 billion (US$19.6 billion) last year and would grow under the deal, it added in a statement.

Canberra and London also plan to “intensify cooperation on security, climate change and science and tech,” the UK government said.

The deal eliminates tariffs on imported Australian goods, such as wine, swimwear and confectionery goods, it said.

Going the other way, British products, including cars, Scotch whisky, biscuits and ceramics, would be cheaper to sell in Australia.

It comes after the two addressed issues surrounding the farming sector.

British farmers would be protected by a cap on tariff-free imports for 15 years, using tariff-rate quotas and other safeguards.

“We are also supporting agricultural producers to increase their exports overseas, including to new markets in the Indo-Pacific” region, the British government said.