This 40km jaunt, beginning at the end of the Nanzihsian river in Kaohsiung’s Namasia District, offers a challenging watertrace all the way to Jade Mountain’s trail head in Nantou County

As we packed up our riverbed camp on a sunny Sunday morning, we looked upstream to the unknown terrain ahead, wondering what surprises lay there. Would we come out on the other side? Or would we be forced to turn around and return to the start, heads hanging low? We had come to the end of the road and were now about to blaze our own trail through over 40km of wilderness to the foot of Jade Mountain.

The day before we had gotten a ride up Provincial Highway 29, which follows the Nanzihsian River (楠梓仙溪) through rural Kaohsiung all the way until it dead ends at an Aboriginal village, Tangaanua, in Namasia District (那瑪夏區). Anyone who has hiked Jade Mountain has seen this river up near its source: it is on the right side of the trail all the way up to the peak. We would attempt to follow this river from the end of the road up to the Jade Mountain trailhead, praying all the way that we would not encounter any slot canyons, waterfalls or other insurmountable obstacles that would force us to turn back. This was above all an experiment, and I was thankful to have my trusty hiking partner Cory along for the walk.

The going was easy at first, as the riverbed was over 200 meters wide and the grade nearly flat. Originally, Provincial Highway 29 was intended to continue through this valley to Provincial Highway 21, connecting Kaohsiung with Sun Moon Lake and Puli. This is more obvious on old maps, where Highway 29 is actually numbered as 21. When the dream of connecting the two parts of 21 was abandoned, the southern section was finally renumbered as 29 and the river valley left undeveloped. 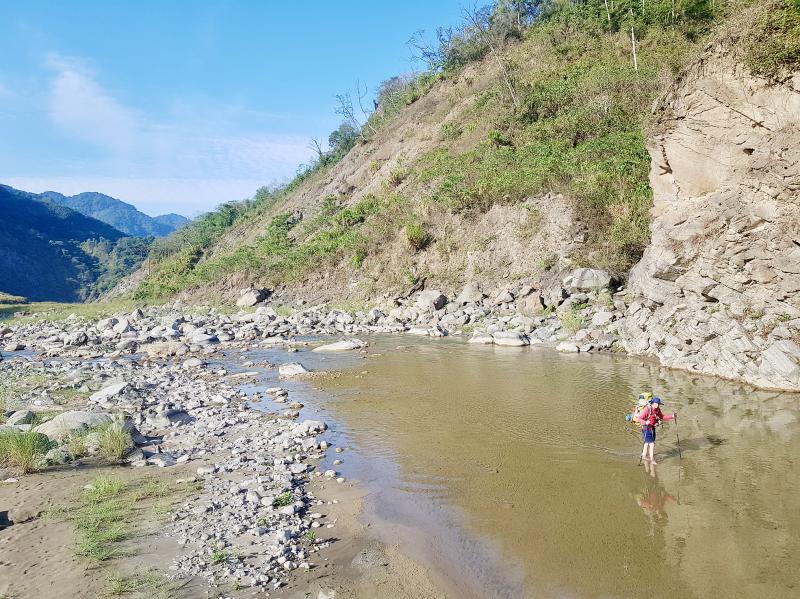 Despite there being no roads or villages back here, we still came across traces of human activity. In three different places, we noticed tarps set up in the bush, marking hunters’ camps. Ten kilometers up from the last village, a used shotgun shell lay on the riverbed. At this elevation, wild boar, muntjac, serow and flying squirrel are all potential hunting targets. We saw evidence of these animals’ presence in the form of skeletons lying on the rocks, bleached from the sun, as well as one partially-mummified serow. We also caught a glimpse of two serows running away from us, and heard a muntjac barking (incessantly) at night.

Near the shotgun shell was an odd sight: a car battery sitting on the dry riverbed, upright, in seemingly perfect condition. We had not seen any tracks from off-road vehicles, so it was hard to imagine how it had even gotten out here, and why a good battery would be abandoned. The mystery was not cleared up until after the trip, when a friend recognized what it was for: electrofishing. This is perhaps not surprising as enforcing a ban on the practice is nearly impossible out here, and the river is absolutely teeming with Taiwan shovel-jaw carp. 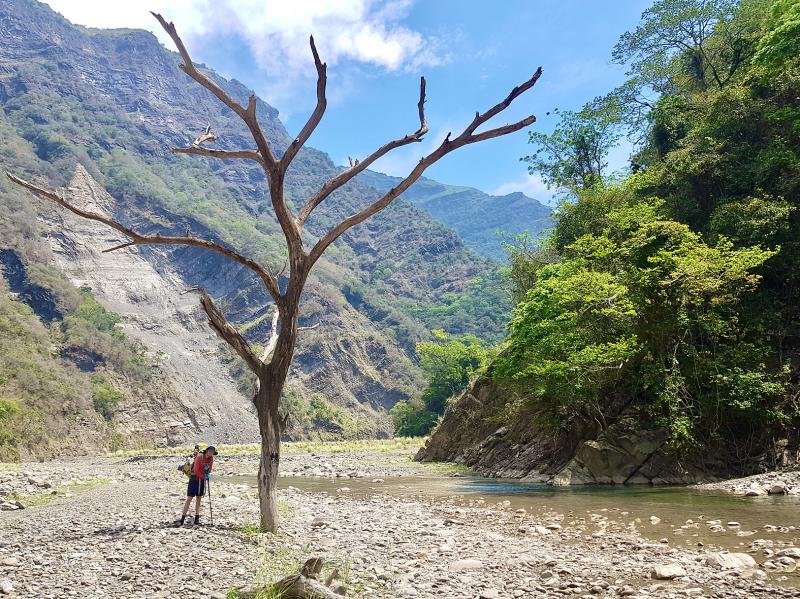 In 2009, Typhoon Morakot created hundreds of landslides, filling the riverbed with an enormous amount of gravel and making it much wider and flatter than it used to be. Thanks to this natural landscaping, the going was easy throughout the first day and we made it further than expected. There was also no shortage of flat, sandy spots for us to pitch our tents.

Just as we finished setting up our camp, a peculiar smell wafted toward us. It was the unmistakable smell of something rotting. Neither of us was surprised, as we had already seen so many traces of dead animals on the riverbed that day. It’s quite common to come across recently dead animals while in remote mountain areas, and it is a smell one can never quite get used to. Normally, it is but a temporary inconvenience as one passes by on the trail; having to deal with the smell all night in camp was a different story. Fortunately, Cory eventually discovered that a bag of old, now-juicy lettuce in his pack was actually the source of the smell this time. Crisis averted; we didn’t need to move camp.

The second day would be the real challenge, as we were getting further upstream and the river was getting narrower. All it would take was one place where the valley narrowed to a waterfall or canyon and we might not be able to continue. Turning the first corner today, I caught sight of something black bounding away from us: a wild boar that had so far evaded the local hunters. These animals can seriously injure a human with their tusks, but are generally fearful of people and run away, as this one did.

In the morning we cut across a high gravelly terrace some 10 meters above the river. It was extremely flat, almost artificially so. Perhaps this was a former settlement? At the far end we were surprised to find the remains of a footbridge. Even more strangely, the bridge was not pointed across the river, but parallel to it. Its purpose seemed to be to cross flat dry land. We theorized as to the origin of the bridge and flat terrace, but neither of us came close to the truth. Even standing right there, we could not bring ourselves to imagine the full power of a typhoon.

Further research after the trip clarified the issue. It turns out the river used to make a 90-degree bend here to pass far beneath this bridge. But Morakot’s floodwaters filled the valley right up, leaving a flat terrace of gravel ten meters deep in its place and washing away the bridge in the process. It also took an enormous chunk out of the mountain further downstream, and the river now makes its 90-degree bend much further downstream in this newly excavated land.

After passing the confluence with Boboyou River (博博猶溪), our anticipation grew, as Jade Mountain’s West Peak came into view. At the same time, our apprehension grew, as the river was suddenly smaller and narrower. There were now rapids and small waterfalls to get around, and the boulders on the sides were getting larger and harder to scale. This would certainly not be navigable in the summer and even now we knew we were pushing our luck. 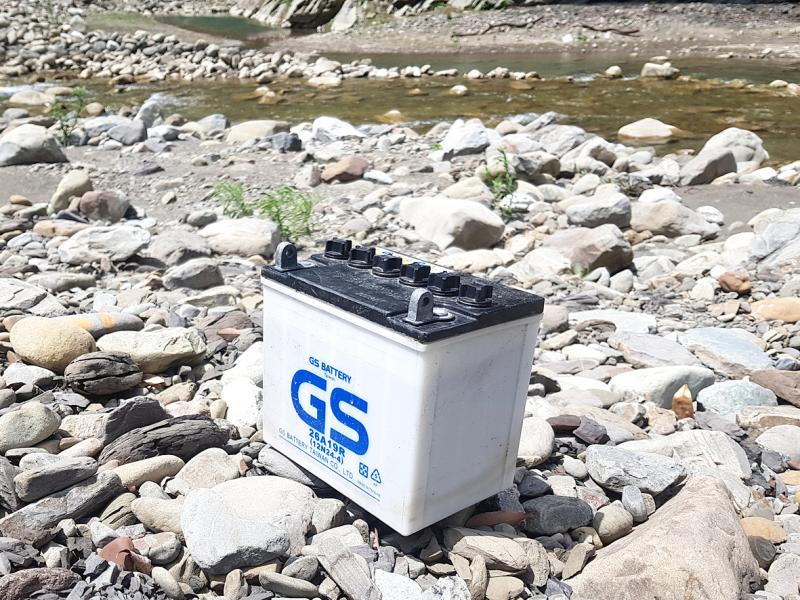 At one point, we spooked a sambar deer standing in the middle of a steep landslide. It trotted away, completely unfazed by this treacherous terrain and likely laughing at our clumsy attempts to navigate the riverbed. I checked the GPS and noticed that we were now entering Yushan National Park, though of course the park hadn’t bothered to put up a sign here. We now had just 2 hours of riverbed left, but if we encountered an obstacle, we’d really be up the creek without a paddle.

When we passed two rock cairns on the bank, I nearly collapsed in relief. From here, a trail led into the trees to the nearby Nansi Forest Road (楠溪林道). We crossed the river on a well-made bridge, passed by the research center, and continued up the road to the Jade Mountain trailhead. Heads held high, we set foot in Nantou County, completing the mission. 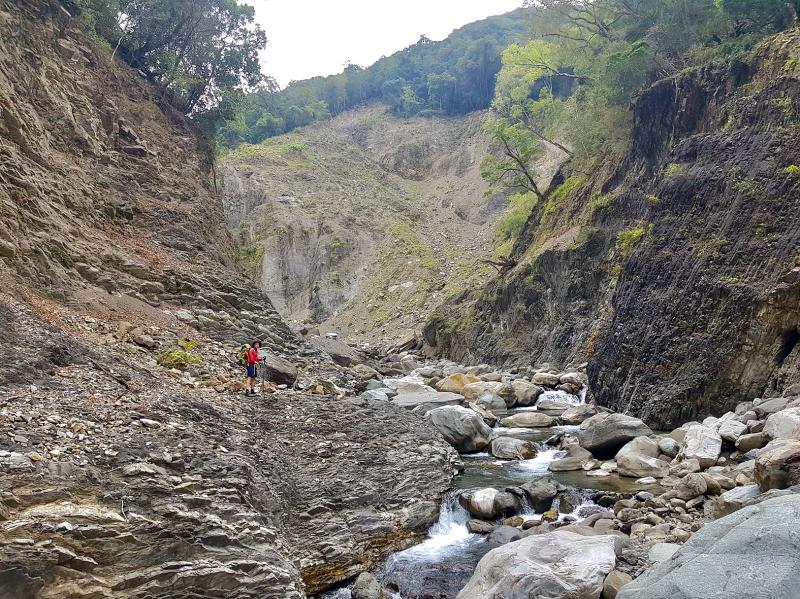