LOW-PROFILE:
A Veterans Affairs Council mission in the US could bolster interpersonal ties and lead to more comprehensive interaction between Taiwan and the US

US veterans could leverage their influence to push for broad-based cooperation with Taiwan, furthered by closer personal ties that would be fostered by a Veterans Affairs Council (VAC) mission soon to open in Washington, an analyst said.

While meeting a US congressional delegation in Taipei on Friday, President Tsai Ing-wen (蔡英文) announced that an official VAC mission would be established early next year. 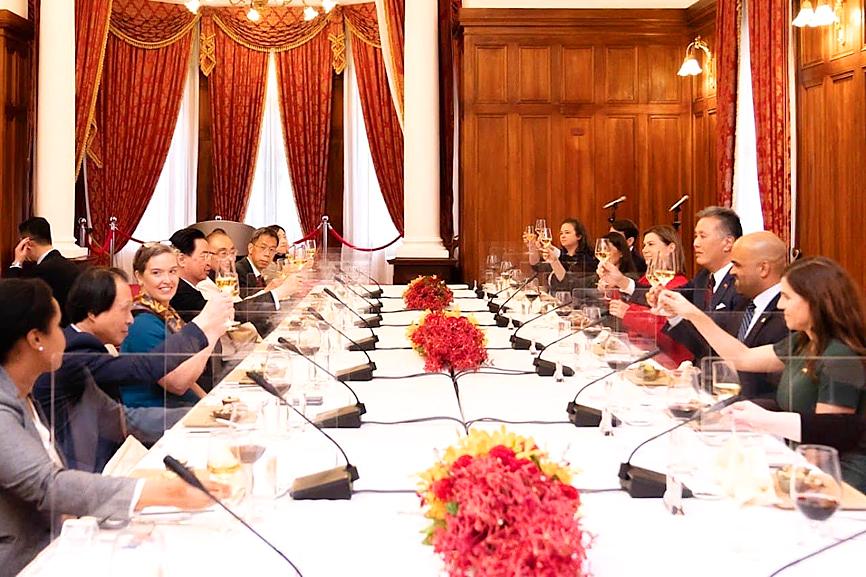 The council has in the past had limited interaction with senior US Department of Veterans Affairs officials, said Wong Ming-hsien (翁明賢), director of Tamkang University’s Graduate Institute of International Affairs and Strategic Studies.

However, civic veterans’ organizations in the US have long maintained close contact with Taiwan, even flying the Republic of China flag in some cases, Wong said in an interview on Saturday.

Since Tsai took office in 2016, three major US veterans’ groups — the American Legion, the Veterans of Foreign Wars and AMVETS — have sent representatives to Taiwan, he said.

In 2019, Tsai delivered a video address at the national convention of the American Legion, the largest veterans’ organization in the US, he added.

Lee Che-chuan (李哲全), a researcher at the Institute for National Defense and Security Research, agreed that the VAC mission would bolster interaction between Taiwan and the US.

It would also lead to more comprehensive exchanges in the manner of normal diplomatic relations, he added.

As it has a relatively low profile, the council could through its Washington mission assist from the sidelines in reforming the nation’s reserve forces, Lee said.

Veterans, in addition to active-duty personnel, play an important role in national defense, he said, adding that this is a crucial part of military exchanges with the US.

The VAC mission, paired with an invitation to attend next month’s Summit for Democracy, shows US commitment to upholding the 2018 Taiwan Travel Act, which allows for high-level visits between the two nations, Wong said.

Increased exchanges in the national security field also show that the US is not allowing China to influence its relations with Taiwan, he added.

The mission could facilitate visits by Taiwanese veterans to the US to meet their counterparts, indirectly boosting military cooperation by deepening personal relationships, Wong said.

US veterans also hold significant influence in the US Congress, and could potentially leverage this influence to push for closer relations between Taiwan and the US, he added.