‘BETTER UNDERSTANDING’:
After COVID-19 closed schools in the country, an NGO started giving IT classes to children whose families make a living by recycling waste

The COVID-19 pandemic closed their school, but it also thrust a group of disadvantaged Mexican children living next to a giant garbage dump into the digital world.

A project teaching the students how to use computers and the Internet has given them hope of a life far from the trash mountain where their parents work recycling waste.

Miguel Tejeda had never used a computer before COVID-19 arrived, because there were no machines in the 14-year-old’s school in Chimalhuacan, located in the urban sprawl surrounding the capital, New Mexico. 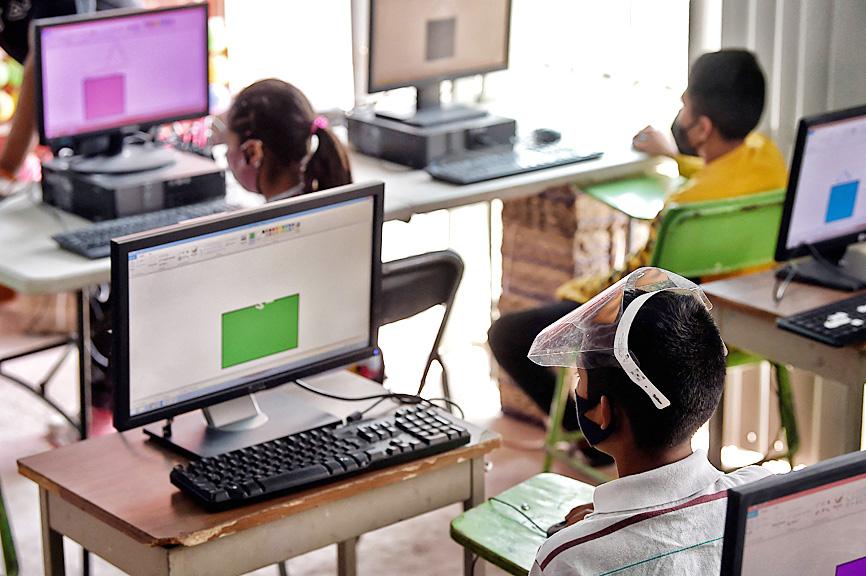 However, for the past six months, he and 200 other students aged five to 21 have learned basic IT skills helped by a Mexican non-governmental organization (NGO), using old computers donated by a religious association.

“Learning is much easier with the computers. We have a much better understanding of subjects,” Tejeda said, wearing a mask and face shield.

In a makeshift classroom in an unfinished house, the NGO Utopia taught the students reading, writing and mathematics, as well as how to send files in the PDF format.

The fetid smell of garbage wafted over from the nearby dump.

After schools shut, the NGO added digital skills to its educational plan so that the students in the disadvantaged community could continue their studies remotely.

Before the crisis struck, “for us it was more important to teach them to read than to use Word,” Utopia founder Jesus Villalobos said.

The impoverished community is located in one of the most populated and violent municipalities in the country.

The dusty district of Corte Escalerillas, home to about 5,000 people working mainly to collect and separate 12,000 tonnes of garbage a day, has had public lighting and water supplies for barely a year.

Harassed by aggressive dogs, some children help their parents, scavenging for waste that can be recycled.

If they stop studying, “the first thing they do is go collect garbage with a donkey, and there, among the trash, they lose their life plan,” Utopia coordinator Yahir Ruiz said.

“Sometimes the first contact of these children with a computer is at 15 or 16 years old, because the schools were not equipped,” Ruiz added.

About 30 million students in Mexico are not physically going to school because of the pandemic, which prompted the government to start distance-learning via television or the Internet.

According to UNESCO, about one-quarter of Mexican students between the ages of seven and 17 have no Internet access and 4.4 percent have no television.

High-school student Norma Hernandez does not have a computer at home and can only get two channels on her television because of the limited signal.

Her mother recently had the Internet installed so her brother could study online using his cellphone.

“But the signal is so bad here that sometimes it’s impossible to connect,” the 13-year-old said.

The Mexican government has said that schools would reopen only when the risk of infection has dropped sufficiently.

In the meantime, 17-year-old Armando Alvarado said he is no longer daunted by using a computer.

“The first time, when they started teaching me here about computing, I was scared, that I was going to have to take it to pieces or something like that,” said Alvarado, who learned to read at the age of 12 with help from the NGO.

“When they began to teach me everything became easy,” he said.