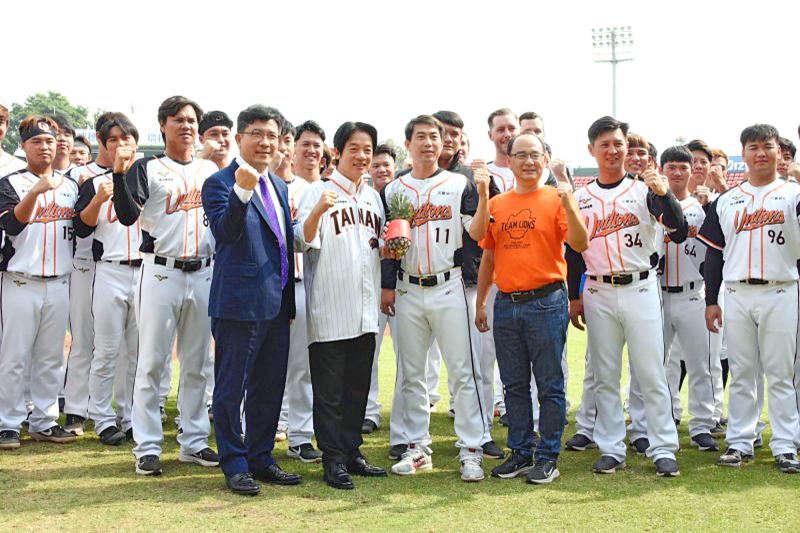 Vice President William Lai yesterday visited a Uni-President Lions practice at the Tainan Municipal Stadium, as the team prepare for tomorrow’s Taiwan Series opener against the CTBC Brothers in Taichung.

The former Tainan mayor gave the Lions a pineapple, a symbol of prosperity and good fortune, to wish the team success in the best-of-seven series.

“I have only one request… You must win the championship title,” Lai said.

Lions closer Chen Yun-wen presented Lai with a jersey, featuring the words “Tainan” on the front, on behalf of the team, along with club chairman Tu Chung-cheng and general manager Su Tai-an.

Although a native of what is now New Taipei City’s Wanli District, Lai has adopted Tainan as his hometown. In addition to attending National Cheng Kung University, he started his political career in the city in the 1990s and later served as its mayor until 2017.

Well-known as a knowledgeable baseball fan, Lai is open about his avid support for the Tainan-based Lions, often attending their games. He also appeared as a commentator for a live broadcast of a Lions-Brothers game on Aug. 21. 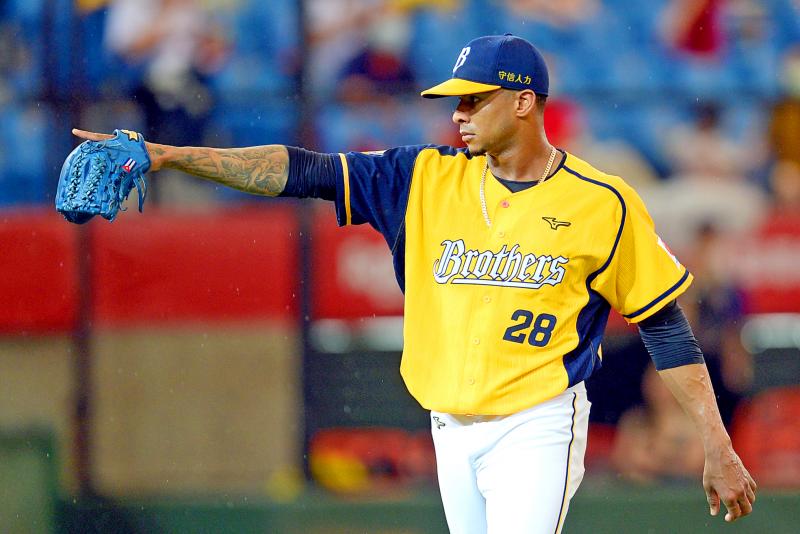 This year’s series features two rookie managers going head-to-head: Lin Yue-ping of the Lions and Chiu Chang-jung of the Brothers.

Both are veteran players, with Lin wrapping up his 13-year career in 2017 as a relief pitcher with the Lions, with 129 saves, a CPBL record.

Chiu spent about half of his 13 professional seasons with Taiwan Major League’s Taichung Agan, and later prominently as an infielder in the fearsome hitting lineup of the Macoto Cobras, when the team in 2002 joined the CPBL to compete in the league’s then-six-team format.

The managers said that they plan to assign foreign pitchers to start the games, with the Lions using Americans Tim Melville, Teddy Stankiewicz and Brock Dykxhoorn, while the Brothers have put together a Latin-American contingent of Ariel Miranda of Cuba, and Jose de Paula and Esmil Rogers, of the Dominican Republic.

They are to use Taiwanese pitchers for the mid-to-late innings as setup men, while the Lions’ Chen Yun-wen and Brothers’ C.C. Lee are the teams’ best closers. Both had league-best 23 saves this season.

The Brothers are to host the opening two games of the series at the Taichung Intercontinental Baseball Stadium, tomorrow and Sunday, starting at 5pm.

The Lions are to host the next three games of the series on Tuesday, Wednesday and, if necessary, Thursday in Tainan, all with 6:30pm start times.

If needed, games 6 and 7 would be on the following Saturday and Sunday, both in Taichung at 5pm.

Fans can look forward to an exciting showdown as the Brothers’ formidable pitchers face the Lions’ “Outfield Handsome Trio,” which include the season’s top two hitters, Taiwanese-Argentinian slugger Lin An-ko, who tops the charts with 32 home runs and 99 RBIs, and Chen Chieh-hsien, who has won batting titles this year for most hits, at 174, and best average, at 0.360.

COVID-19 prevention measures are to be in place for all games, with staff to check fans’ temperatures and take their contact information upon entry, league officials said.

Masks are not required at designated seats, but people are to wear one when moving about the stadium, they said.